Lawmakers to get classified briefing on Russia bounty intel 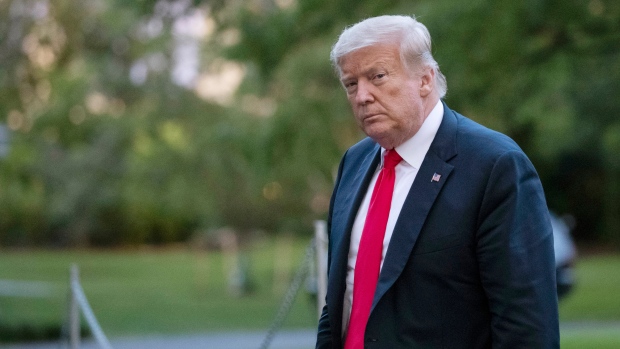 FILE- In this Thursday, June 25, 2020, file photo, President Donald Trump walks on the South Lawn after arriving on Marine One at the White House in Washington. (AP Photo/Alex Brandon, File)

The meeting comes as President Donald Trump, who says he wasn't briefed on the information because it wasn't verified, is under increasing pressure to provide answers about the U.S. response to Russia or the lack of one.

Democrats briefed at the White House this week suggested Trump was bowing to Russian President Vladimir Putin at the risk of U.S. soldiers' lives.

Trump has called the intelligence assessments a “hoax” and insisted he hadn't been briefed on them because the intelligence didn't rise to his level. However, national security adviser Robert O'Brien said the CIA and the Pentagon pursued the leads and briefed international allies.

At a State Department news conference, Secretary of State Mike Pompeo said Wednesday the situation was handled “incredibly well” to ensure the safety of U.S. troops.

“We took this seriously, we handled it appropriately,” Pompeo said, without giving additional details. He said the administration receives intelligence about threats to Americans “every single day” and each is addressed.

Pompeo added that Russian activity in Afghanistan is nothing new and that Russia is just one of many nations acting there. He said that Congress has had similar information in the past and that he often receives threat assessments that don't rise to the level of a presidential briefing.

The intelligence assessments that Russia offered bounties were first reported by The New York Times, then confirmed to The Associated Press by American intelligence officials and others with knowledge of the matter.

The White House has insisted that Trump wasn't briefed on the assessments because they hadn't been “verified.” White House press secretary Kayleigh McEnany pointed to an individual who she said made the decision not to brief Trump, identifying the person as a female CIA officer with more than 30 years of experience. O'Brien, the national security adviser, said the person was a “career CIA briefer.”

Trump remained defensive about the intelligence on Wednesday, dismissing stories about it as “Fake News” made up to “damage me and the Republican Party.” Later, Trump said that it was a hoax and “we never heard about it” because intelligence officials didn't think it rose to that level.

“The intelligence people, many of them didn't believe it happened at all,” Trump said on Fox Business.

O'Brien said the intelligence wasn't brought to Trump's attention initially because it was unverified and there was no consensus among the intelligence community. But it's rare for intelligence to be confirmed without a shadow of doubt before it is presented to senior government decision-makers.

Senate Republicans appeared split on the matter, with several defending the president and saying that the Russian meddling wasn't new. Wisconsin Sen. Ron Johnson, chairman of the Homeland Security and Governmental Affairs Committee, said Trump “can't be made aware of every piece of unverified intelligence.”

Sen. Patrick Toomey of Pennsylvania said he had reviewed classified documents regarding the potential bounties “upon which recent news reports are based” and said the information raises many questions.

“If it is concluded that Russia offered bounties to murder American soldiers, a firm American response is required in short order,” Toomey said.

Iowa Sen. Chuck Grassley said that if the reports are true, “it demands a strong response, and I don't mean a diplomatic response.”

House Democrats briefed this week at the White House questioned why Trump wouldn't have been briefed sooner and pushed for Trump to make a strong statement.

House Intelligence Committee Chairman Adam Schiff said it was “inexplicable” that Trump won't say publicly that he is working to get to the bottom of the issue and won't call out Putin. He said Trump's defence that he hadn't been briefed was inexcusable.

“Many of us do not understand his affinity for that autocratic ruler who means our nation ill,” Schiff said.

The intelligence community has been investigating an April 2019 attack on an American convoy that killed three U.S. Marines when a car rigged with explosives detonated near their armoured vehicles as they travelled back to Bagram Airfield, the largest U.S. military installation in Afghanistan, officials told the AP.

Three other U.S. service members were wounded in the attack, along with an Afghan contractor. The Taliban claimed responsibility. The officials the AP spoke to also said they were looking closely at insider attacks from 2019 to determine if they were linked to Russian bounties.

Intelligence officials told the AP that the White House first became aware of alleged Russian bounties in early 2019 - a year earlier than had been previously reported. The assessments were included in one of Trump's written daily briefings at the time, and then-national security adviser John Bolton had told colleagues he had briefed Trump on the matter.