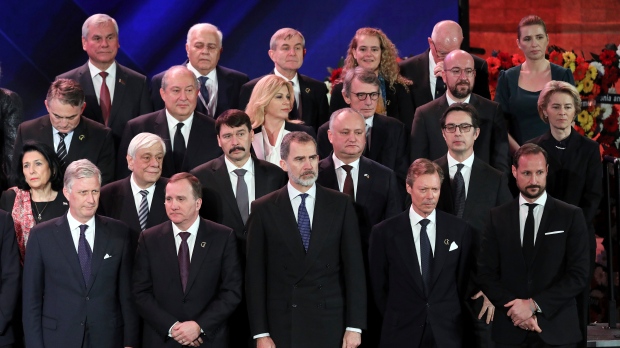 World leaders pose for a family photo during the World Holocaust Forum in Jerusalem, Thursday, Jan. 23, 2020. U.S. Vice President Mike Pence, Russian President Vladimir Putin, French President Emmanuel Macron, and the presidents of Germany, Italy and Austria were among the more than 40 dignitaries attending the World Holocaust Forum, which coincides with the 75th anniversary of the liberation of the Auschwitz death camp. (Abir Sultan/Pool Photo via AP)

JERUSALEM - Speaker by speaker, world leaders on Thursday denounced the rising threat of anti-Semitism and vowed never to forget the lessons of the Holocaust at a solemn ceremony in Jerusalem marking the 75th anniversary of the liberation of the infamous Auschwitz death camp.

But the high-powered dignitaries also tinged their speeches with competing interpretations of World War II and its relevance today, giving a politically charged feeling to the gathering.

The three-hour event at Jerusalem's Yad Vashem Holocaust memorial sought to project a united front in commemorating the destruction of European Jewry amid a global spike in anti-Jewish violence. But from the start, it was clouded by rival national narratives of World War II's major players.

Poland's president, who has been criticized for his own wartime revisionism, boycotted the gathering even before it began since he was not invited to speak. The president of Lithuania, a country seeking to diminish its own culpability while making heroes out of anti-Soviet nationalists involved in the mass killing of Jews, abruptly cancelled his participation days before the event. And the president of Ukraine, another country with a dubious reckoning of its role in the genocide, mysteriously backed out while in Israel shortly before the ceremony began.

Putin was granted a central role even as he leads a campaign to play down the Soviet Union's prewar pact with the Nazis and shift responsibility for the war's outbreak on Poland, which was invaded in 1939.

In his address, Putin highlighted the role of the Red Army in liberating Auschwitz on Jan. 27, 1945, while singling out the collaboration by regional foes Ukraine, Lithuania and Latvia. He called them “bandits” who “often surpassed their masters in cruelty.”

In a nod toward Poland and others, he said the Holocaust would only serve as a warning to future generations if told in full, “without exemptions and omissions.”

“Regrettably, the memory of the war today often becomes the subject of current political interests,” he said.

Putin himself has been accused of the same, shaping a narrative around his country's “Great Patriotic War” that began in 1941 after Nazi Germany invaded the Soviet Union, and ignoring the nonaggression accord the Soviets had signed two years earlier.

On the eve of the gathering, host Israeli President Reuven Rivlin implored visiting dignitaries to “leave history for the historians,” saying it was the role of political leaders to “shape the future.” But Putin quickly ventured into the sensitive terrain shortly after his arrival Thursday, claiming that 40% of Jewish Holocaust victims were Soviet.

Of the 6 million Jews killed by the Nazis, historians say about 1 million were Soviet. Putin's figure appeared to include an additional 1.5 million Jewish victims from eastern European areas occupied by the Soviets under their pact with the Nazis.

Netanyahu, who seeks Putin's support in holding off Iranian forces in neighbouring Syria and in securing the release of a young Israeli woman imprisoned on drug charges in Russia, gave the Russian leader a fawning welcome. He hosted Putin for the dedication of an imposing monument honouring the nearly 900-day Nazi siege of Leningrad. The city, now known as St. Petersburg, is Putin's hometown.

“We mustn't for even one second blur the sacrifice and the contribution of the former Soviet Union,” Netanyahu said.

In his own address to the forum, Netanyahu reiterated his long-held conviction that the primary lesson of the Holocaust is that Jews had to defend themselves in the face of annihilation, pointing toward his current standoff with Iran as an example.

“I am concerned that we have yet to see a unified and resolute stance against the most anti-Semitic regime on the planet, a regime that openly seeks to develop nuclear weapons and annihilate the one and only Jewish state,” he said. “For the Jewish people, Auschwitz is more than the ultimate symbol of evil. It is also the ultimate symbol of Jewish powerlessness ... Today we have a voice. We have a land, and we have a shield.”

Pence also invoked Iran, calling on the world to stand strong against “the one government in the world that denies the Holocaust as a matter of state policy and threatens to wipe Israel off the map.”

For historians, the main message was one of education amid growing signs of ignorance and indifference to the Holocaust. A survey released this week by the Claims Conference, a Jewish organization responsible for negotiating compensation for victims of Nazi persecution, found that most people in France did not know that 6 million Jews were killed during World War II. Among millennials, 45% said they were unaware of French collaboration with the Nazi regime. France's wartime government deported 76,000 Jews to death camps.

Macron decried the rising anti-Semitism in Europe. A recent survey reported that 80% of European Jews felt unsafe on the continent.

But in contrast to more hawkish speakers, Macron said another lesson of the Holocaust was that Europe must be unified in the face of hatred and never devolve into conflict again.

“The Holocaust is not some history you can play with or distort or revisit,” he said. “No one has the right to use the memory of the dead to justify some kind of contemporary hatred.”

Tel Aviv University researchers reported last year that attacks against Jews grew significantly in 2018, with the largest reported number of Jews killed in anti-Semitic acts in decades. They recorded 400 attacks, with the spike most dramatic in western Europe.

Among the final speakers was Steinmeier, who bemoaned that the atrocity originated in his country. He said he stood before the audience “laden with the heavy, historical burden of guilt.”

“Germans deported them. Germans burned numbers on their forearms. Germans tried to dehumanize them, to reduce them to numbers, to erase all memory of them in the extermination camps. They did not succeed,” he said. “I wish I could say that we Germans have learnt from history once and for all. But I cannot say that when hatred is spreading.”