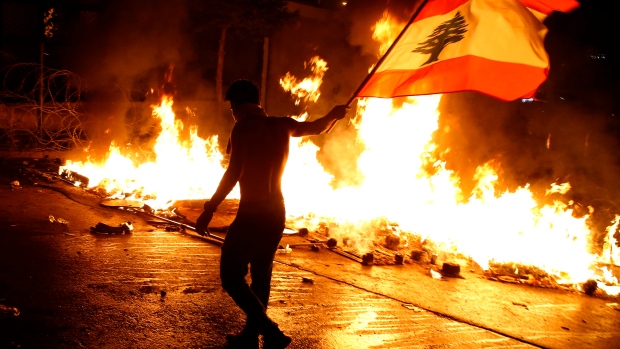 An anti-government protester holds a Lebanese flag in front of a barricade on fire on a road leading to the parliament building, during ongoing protests against the government, in Beirut, Lebanon, Wednesday, Nov. 13, 2019. (AP Photo/Bilal Hussein)

BEIRUT - A man opened fire with a shotgun over the heads of protesters in a town north of Beirut on Wednesday. It was the second shooting incident in as many days amid nationwide protests and as tensions rose in Lebanon between supporters and opponents of President Michel Aoun.

There were no casualties in the shooting, which followed scuffles between rival groups from the area around the Christian town of Jal al-Dib. The groups threw stones at each other, injuring at least one person in the head. The man who fired in the air was later apprehended by security forces.

The incident came a day after a 38-year-old father was shot dead by a soldier at a protest Tuesday night, marking the first such fatality since the economically driven demonstrations against the government engulfed the country on Oct. 17. That protest was ignited by comments made by Aoun in a televised interview, in which he said there could be further delays before a new government is formed. He also said the best option was a Cabinet made up of technocrats and politicians to deal with the country's economic and financial troubles.

He urged those protesting to go home, warning of a “catastrophe” if the mass protests continued paralyzing the country.

On Wednesday, protesters blocked major highways with burning tires and other debris, saying they will remain in the streets despite the president's appeal for them to leave.

Schools and universities were closed and banks remained shuttered - a reflection of the deepening political and financial crisis the tiny country faces.

“Men carrying sticks and chains attacked us,” said Elie Khoury, an anti-Aoun protester in Jal al-Dib, before troops deployed in the area and opened the road that had been closed by burning tires and roadblocks for hours.

Lebanon is passing through its worst economic and financial crisis since the 1975-90 civil war. It led to anti-government protests that culminated in mid-October as demonstrations spread across much of Lebanon. The protesters are also complaining of widespread corruption and calling an end for the rule of the political elite that has been running the country since the conflict ended. Prime Minister Saad Hariri resigned on Oct. 29 in the face of the protests, and there has been no significant movement on a new government since.

The protesters, who have been calling for a Cabinet made up solely of experts who could tend to the country's urgent economic and financial woes, rejected Aoun's speech.

“Our demands are known, we need a technocrat government that is not related to any politician,” said protester Melissa Barrak, a sales manager speaking at a major intersection in central Beirut that was closed by the demonstrators.

Caretaker Foreign Minister Gebran Bassil said in a statement that work for the formation of a new Cabinet has reached “advanced and positive stages.” He did not elaborate.

Media outlets of the militant Hezbollah group and Aoun's political party reported Wednesday that Hariri will most likely refuse to form a new Cabinet. Contacts were still ongoing with Hariri to know his final decision and whether he would choose a person close to him to be the next prime minister, according to Hezbollah's Al-Manar TV and el-Nashra news website, which is closely aligned with Aoun's party.

Highways linking Beirut with southern and northern Lebanon as well as other roads in major cities and towns were also closed Wednesday. Policemen opened Wednesday morning the Fuad Chehab avenue in Beirut, hours it was closed by protesters.

In Nahr al-Kalb north of Beirut, protesters closed a tunnel by parking their cars inside it while a nearby highway was filled with debris. In Khaldeh, on Beirut's southern entrance, tires were set on fire and sand barriers closed a vital highway.

Black smoke billowed from several locations in and around the city Wednesday. Near the country's only international airport, travellers were seen dragging suitcases as they continued on foot to the airport, after protesters blocked the highway.

The place where the first fatality in the protests, Alaa Abou Fakher, was shot in the Khaldeh area was decorated with roses and a Lebanese flag was placed nearby. He was the first to be killed in direct shooting related to the protests, though there have been four other deaths since the demonstrations began.

A man was shot and killed in the early days of the protests by a man forcing people to pay bribes to pass through road barriers leading to the airport, while two Syrian workers choked to death when a fire was set inside a downtown Beirut building where they were sleeping.

Also, a young man fell inside a building as he was trying to climb to the roof to take photographs. He died days later in hospital.

Aoun on Wednesday met with French envoy Christophe Farnaud, who carried a message from France's President Emmanuel Macron expressing Paris' concerns about the situation in Lebanon and its readiness to help the Arab country.

Anti-government protesters set pieces of wood on fire on a road leading to the parliament building, during ongoing protests against the government, in Beirut, Lebanon, Wednesday, Nov. 13, 2019. Lebanese protesters said they will remain in the streets despite the president's appeal for them to go home. (AP Photo/Bilal Hussein)