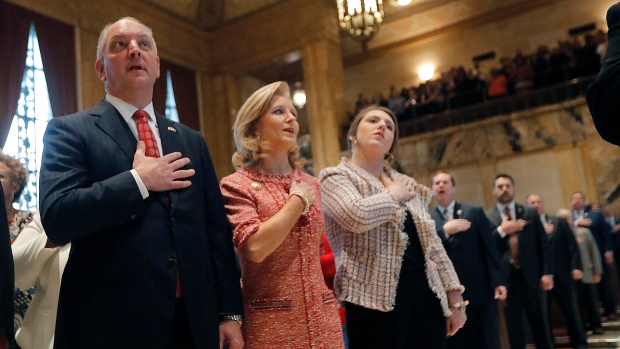 FILE - In this Monday, April 8, 2019 file photo, Louisiana Gov. John Bel Edwards holds his hand to his heart with his wife, Donna Edwards, and their daughter Sarah Ellen Edwards, right, during the pledge of allegiance at the opening of the annual state legislative session in Baton Rouge, La. (AP Photo/Gerald Herbert, Pool, File)

Now, daughter Samantha is married and working as a school counsellor, and Edwards finds himself an outlier in polarized abortion politics.

"My position hasn't changed. In eight years in the Legislature, I was a pro-life legislator," he said. When he ran for governor, his view was the same. "I'm as consistent as I can be on that point."

Edwards, who has repeatedly bucked national party leaders on abortion rights, is about to do it again. He's ready to sign legislation that would ban the procedure as early as six weeks of pregnancy, before many women know they are pregnant, when the bill reaches his desk.

Louisiana's proposal , awaiting one final vote in the state House, would prohibit abortion after a fetal heartbeat is detected, similar to laws passed in Kentucky, Mississippi, Georgia and Ohio that aim to challenge the U.S. Supreme Court's 1973 Roe v. Wade decision that legalized abortion. Alabama has gone even further, enacting a law that makes performing abortions a felony at any stage of pregnancy with almost no exceptions.

But the abortion bans in those other conservative states -- spurred by anti-abortion activists hoping the addition of conservative judges to the Supreme Court could help overturn Roe v. Wade -- were backed by Republican governors.

A rarity in his party, Edwards' anti-abortion stance provokes angry outcries on social media from Democratic voters and disappointment within the party's broader ranks across the country.

"When Republicans are taking away women's rights at every step, it's on the Democrats to show that we are the party that will protect women. When we fail to do that, we make it absolutely hopeless for women around the country," said Rebecca Katz, a progressive Democratic consultant.

The abortion-rights debates that divide state Capitols across the nation cause few ripples in the Louisiana Legislature. It is one of the country's most staunchly anti-abortion states, with a law on the books that immediately outlaws abortion if Roe v. Wade is ever overturned. State lawmakers annually enact new regulations seeking to curb access with bipartisan support.

This year's so-called heartbeat bill, sponsored by Democratic state Sen. John Milkovich, has received little public opposition from lawmakers as it steadily advances. The ban, however, only would take effect if a federal appeals court upholds a similar law in Mississippi.

The Louisiana bill includes an exception if the pregnant woman's health is in "serious risk," but not for pregnancies caused by rape or incest.

"It gives a very small window for a woman to be able to access abortion services," said Elizabeth Nash of the Guttmacher Institute, an abortion rights organization that researches reproductive health issues.

Edwards' embrace of the anti-abortion legislation is unusual for a present-day Democratic governor, Nash said, although that was not always the case.

"If you think back 20 years, abortion politics were less along party lines," she said. "There were moderate Republicans who supported abortion rights because they felt there was a right to privacy and places where government should not go."

Edwards said his views are in line with the people of his conservative, religious state, who he described as "overwhelmingly pro-life." And he said he extends that philosophy to his decision to expand Louisiana's Medicaid program under the federal health overhaul law, a decision unpopular with Republicans, "because I think that, too, is pro-life."

"That's the way I was raised. That's what my Catholic Christian faith requires," the governor said on his monthly radio show. "I know that for many in the national party, on the national scene, that's not a good fit. But I will tell you, here in Louisiana, I speak and meet with Democrats who are pro-life every single day."

When he ran for governor in 2015, Edwards made opposition to abortion a central platform of his campaign. In a TV ad, his wife, Donna, described being advised to have an abortion because of their daughter's spinal birth defect. The ad showed a grown-up Samantha as Donna Edwards said, "She's living proof that John Bel Edwards lives his values every day."

But that narrative is tough to make stick against a governor who repeatedly signs abortion restrictions, along with data released in March that showed the number of abortions in Louisiana declined each year of Edwards' tenure.

"This is not an easy issue to pigeonhole people -- or especially me -- on, at least, because I don't think the labels really work," Edwards said.