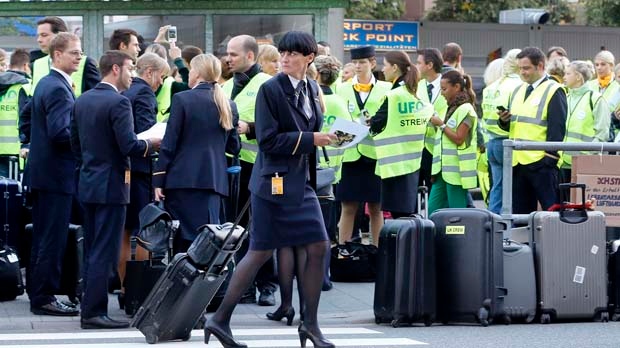 Cabin attendants take part in a demonstration at the Frankfurt airport as the flight attendants of Lufthansa went on a seven-hour strike at the international airport Friday, Aug. 31, 2012 in Frankfurt, Germany, causing at least 60 cancelled flights. (AP Photo/Michael Probst)

FRANKFURT, Germany -- Lufthansa flight attendants walked off the job Friday at Germany's busiest airport, causing more than 200 flights to be cancelled as their union warned of more stoppages unless the airline gives in to its demands.

Lufthansa, Germany's largest airline, said it cancelled more than 200 short- and medium-haul flights from and to Frankfurt airport after some 1,000 cabin crew went on strike. A small number of long-haul flights were cancelled as well, including to and from New York, Boston and Seattle.

The short-term strike was to last eight hours until early afternoon, but Lufthansa said it would affect Frankfurt flight traffic throughout the day.

Airline spokesman Klaus Walther accused the UFO union of putting its demands "on the back of the customers" and urged them to return to the negotiation table.

But UFO union head Nicoley Baublies said on Bayerischer Rundfunk radio that the Frankfurt strike may just be the beginning if Lufthansa does not meet its demands. The union called the strike after 13 months of negotiations for higher pay and guarantees on conditions failed to produce an agreement.

"It depends on how Lufthansa responds now and how much they try to break the strike and put our people under pressure," Baublies said. He said the union would decide Friday whether to stage similar strikes again Saturday and whether to expand them to other airports.

"That's always possible and we will announce it with six hours' notice," he said.

UFO is seeking a 5 per cent pay raise for the airline's more than 18,000 cabin crew workers. Lufthansa has said it is offering a 3.5 per cent raise.

Other issues include the union's opposition to Lufthansa's demand that flight attendants assigned to Berlin's new airport, whose opening has been delayed, work more hours than elsewhere for the same pay. The two sides are also at odds over the possibility of Lufthansa transferring flight attendants to its partner budget airlines with cheaper contracts as part of a cost-saving program.

Lufthansa is trying to cut some C1.5 billion from its costs by the end of 2014.