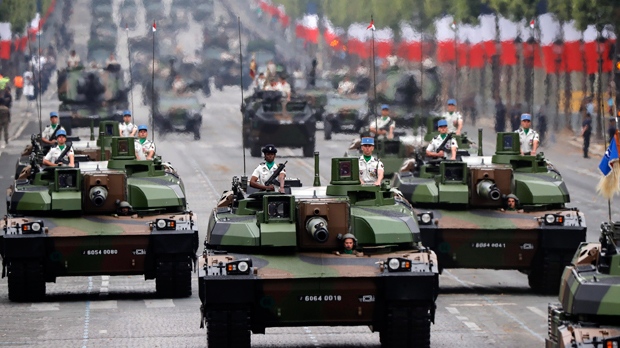 Flags of the 10 European countries that are in a joint military pact spearheaded by Macron last year led contingents of French and foreign armed forces from the Arc de Triomphe down the Champs-Elysees avenue.

France has had a Bastille Day parade since 1880, and it's customary for a foreign leader to be the guest of honour. The guest of honour in 2017, U.S. President Donald Trump, came away so impressed by the spectacle he ordered a military parade in Washington for America's independence day celebration.

In Paris, the focus this year was the European Defence Initiative, a coalition formed last year to prepare for possible military action outside of NATO.

The heads of state of Germany, Portugal, the Netherlands and Finland watched from the ceremonial viewing stand as 4,000 military personnel, 69 military airplanes and 39 helicopters passed by or overhead.

German Chancellor Angela Merkel said the invitation to celebrate France's national holiday “is a symbol for an intensified European co-operation” and “a big gesture toward European defence policy.”

The biggest crowd-pleaser, though, was the man who rocketed through the air on a flying hoverboard. The inventor, former jet-skiing champion Franky Zapata, held a rifle as he zoomed over the parade route on a Flyboard.

Several hundred yellow vest activists - without their trademark fluorescent emergency jackets - gathered on the margins of the parade.

Television images showed police grabbing one of the movement's leaders, Eric Drouet, as he stood peacefully on the sidelines and escorting him away.

Later in the day, riot police squads and groups of young people scuffled amid security barricades along the parade route. Officers fired tear gas to clear the streets after some people set trash cans on fire.