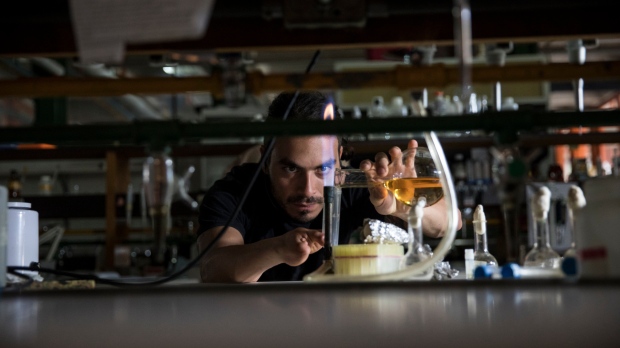 In this Feb. 20, 2019 photo, a scientist works during a blackout inside an almost empty laboratory at the Andes University, Merida, Venezuela. A team of scientists in Venezuela is trying to weather the political and economic crisis engulfing their country to record what happens as Venezuela's last glacier vanishes. (AP Photo/Rodrigo Abd)

MIAMI -- A proposal to rebuild Venezuela's collapsed power grid with the help of the United Nations is proving a political hot potato for Nicolas Maduro's opponents.

On Tuesday, the opposition-controlled National Assembly at the last minute scratched a schedule debate on a $350 million credit from a regional development bank to address an electricity emergency that has left much of western Venezuela in the dark from blackouts for months.

The project's promoters accuse opposition hardliners of playing politics with Venezuela's humanitarian crisis while ignoring the plight of millions of Venezuelans who urgently demand solutions to everyday travails as the fight to remove Maduro drags on.

"We can't condemn millions of Venezuelans to life without power while we wait for Maduro to give up power," said Oscar Rondero, an opposition lawmaker from Nueva Esparta state, one of the most impacted by the blackouts.

The proposed loan agreement with the Development Bank of Latin America, or CAF, enjoys the backing of Maduro but still requires the National Assembly's approval. The funding would be used to reconnect 1,206 megawatts of power -- about half of its current output from diesel and gas-powered facilities-- in four hard-hit areas as well as backup generators for hospitals nationwide.

The proposal puts the opposition, which considers the Maduro administration corrupt and illegitimate, in a difficult spot, said David Smile, a Venezuela expert at Tulane University. It also lays bare divisions that have grown more embittered as the U.S.-backed campaign to oust Maduro loses its momentum, with many of his opponents exiled for fear of arrest.

"Supporting it would require tacit recognition of the Maduro government," said Smilde, who is also a senior fellow at the Washington Office on Latin America. "But opposing it would mean denying Venezuelans a significant opportunity to improve the terrible conditions they are living in."

To address those concerns, the U.N.'s development agency would be responsible for administering the funding in conjunction with an independent board comprised of representatives of Maduro and opposition leader Juan Guaido. No funds would be provided directly to the state-run utility Corpoelec, which is run by Maduro loyalists and widely blamed for the grid's collapse.

If approved, Smilde says it could help foster closer co-operation between the two feuding sides to stem a crisis that has led more than 4.6 million Venezuelans to flee the country, including support for an "oil for food" deal that is increasingly being floated by policymakers and analysts.

Still, for some in the opposition, any attempt at co-operation with Maduro to address the country's humanitarian crisis, however modest, smacks of treason.

The loan proposal dates from March, when moderate opposition lawmakers gathered with their socialist counterparts at a forum sponsored by what's known as the Boston Group.

The informal group came about in the wake of a 2002 coup as a way for Venezuelan lawmakers across the ideological spectrum, as well as Democrats and Republicans in the U.S., to rebuild trust following Hugo Chavez's brief removal from power. Maduro was among its founding members.

More recently, the group was activated to secure the release of Joshua Holt, a Utah man arrested and held for almost two years on what were widely seen as trumped-up weapons charges.

Guaido, who leads congress and is recognized as Venezuela's rightful president by more than 50 countries, including the U.S., has yet to publicly comment on the debate.

But Rondero said that members of his Popular Will party have expressed misgivings, while the Justice First party -- which controls the largest bloc in congress -- opposes the bill outright.