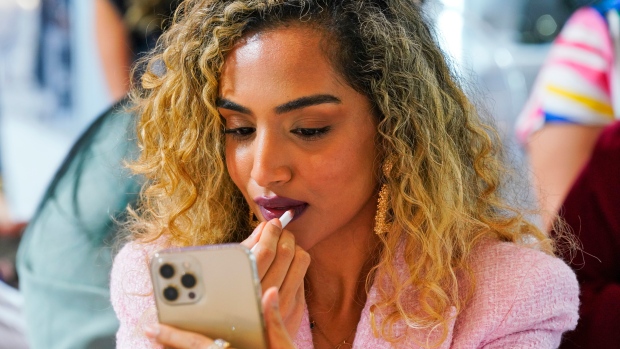 Nora Feranecz of Hungary tries makeup made by makeup artist Mario Dedivanovic's Makeup by Mario brand at City Center Mirdif Mall in Dubai, United Arab Emirates, Friday, Oct. 29, 2021. The coronavirus pandemic has been difficult for the makeup industry, with the surge in home working and cancellations of many social events like weddings. Sales in the multi-billion-dollar Mideast makeup market are beginning to improve as vaccinations see the pandemic wane. (AP Photo/Jon Gambrell)

DUBAI, United Arab Emirates (AP) - While pandemic style saw people put on pajamas and their hair up in a bun, 2021 is more about mascara and lip liners - and makeup sales in the multi-billion-dollar Mideast market are beginning to improve.

For women in the region - and particularly the Gulf Arab states - makeup is one of their biggest spends, offering an opportunity for expression even to those who cover their hair and part of their face with black veils.

After a pandemic sales slump, analysts now predict the Middle East makeup market will grow by as much as 5% over the next five years, even as sales in some parts of the world continue to slow, such as in Western Europe and North America.

Drawing on those trends, Dubai - the glitzy city state that is part of the United Arab Emirates - has been hosting a number of events and celebrities. Among them was Mario Dedivanovic, known for doing Kim Kardashian's makeup, who hosted a talk on the future of beauty over the weekend. With more than 9 million followers, Dedivanovic is one of the most influential makeup artists currently on the scene.

Mask-less women donning designer shoes and bags and wearing the latest makeup trends, gathered at Mirdif City Center Mall to listen to him.

Dedovanovic said Dubai is on par with global beauty hubs.

“Dubai is such a cosmopolitan city. Everywhere in the world, you know, everybody knows about Dubai,” Dedovanovic told The Associated Press. He said makeup artists in Dubai are “doing everything at the same pace that ... it is being done in Paris and Milan and London.”

The makeup industry was worth $4 billion in the Middle East even during the pandemic, according to market research group Euromonitor International. But the pandemic hit it hard with the surge in working from home and cancellations of many social events such as weddings. Pandemic-related job losses also meant less disposable income, and spending focused more on necessities.

Globally, the makeup industry declined by 16% in 2020, Euromonitor said, with the slump slightly less drastic at 10% in the Middle East.

Amna Abbas, a consultant for beauty and fashion at Euromonitor, said some areas of the Middle East, including the UAE, had shorter lockdown periods. Once markets reopened, “we saw signs of recovery happening immediately,” she said.

As people began to go back to offices, socialize more and attend events, makeup sales began improving. Euromonitor said makeup sales growth should hit 6% to 8% in the Mideast this year.

Abbas said the growth has been faster than expected, even though the market is not likely to bounce back to pre-pandemic levels until 2022 or 2023. She added that “recovery is still on.”

Online shopping is also becoming increasingly important and so is the use of social media. After 2020, more women turned to purchasing their favorite shades of lipstick or foundation online, assisted at times by an augmented reality feature where they could see what they would look like wearing a specific color.

As part of the growing reliance on online shopping, women in the Gulf follow celebrities, influencers, and makeup brands on social media to find out about trends and beauty tips. Huda Kattan, a Dubai-based Iraqi-American beauty magnate, has built a billion dollar business here on that.