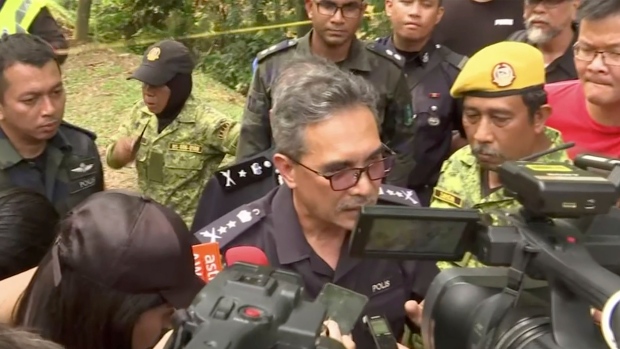 In this image from a video, Negeri Sembilan state police chief Mohamad Mat Yusop, center, speaks to media in Pantai, Malaysia Tuesday, Aug. 13, 2019. Malaysian rescuers on Tuesday found the body of a Caucasian female in the forest surrounding a nature resort where a 15-year-old London girl was reported missing more than a week ago, police said. The state police chief said officials were in the process of determining whether the body is Nora Anne Quoirin, who was discovered missing by her family from the Dusun eco-resort in the southern state on Aug. 4. (AP Photo)

SEREMBAN, Malaysia -- Malaysian police said Tuesday the family of a missing 15-year-old London girl has positively identified a naked body found near the nature resort where she disappeared over a week ago.

Police said rescuers earlier Tuesday found the body of a female Caucasian beside a small stream in steep terrain about 2 1/2kilometres (1 1/2 miles) from the Dusun eco-resort in southern Negeri Sembilan state, where Nora Anne Quoirin went missing Aug. 4. The body was airlifted to a hospital for identification and an autopsy.

“The family members have been brought here to identify the body that we recovered earlier and the family has confirmed that the body is Nora Anne,” Negeri Sembilan police chief Mohamad Mat Yusop told reporters at the hospital morgue.

Quoirin's family arrived Aug. 3 for a two-week stay at the Dusun, a small resort located in a durian orchard next to a forest reserve 63 kilometres (39 miles) south of Kuala Lumpur.

Police believe the teen, who has learning and physical disabilities, climbed out through an open window in the living room of the resort cottage. They listed her as a missing person but said the investigation included possible criminal aspects of the case. The girl's family says she isn't independent and wouldn't wander off alone, and was likely to have been abducted.

Mohamad said a senior pathologist will conduct a post mortem Wednesday morning to determine the cause of death.

National deputy police chief Mazlan Mansor earlier told a news conference that the body, which “was not in any clothing,” was found by volunteers registered with the rescue team Tuesday afternoon in an area that had previously been searched by rescuers. He didn't explain how long the body had been there or why rescuers apparently missed it.

Nearly 350 people have been involved in a massive search operation that included sniffer dogs, elite commando forces and thermal detectors, but no evidence had been turned up until the discovery of the body on Tuesday. Police from Ireland, France and the U.K. are also on site to assist in the investigation. The girl's mother is from Ireland and her father is French, but the family has lived in London for 20 years.

On Monday, the mother, Meabh Quoirin, announced a 50,000 ringgit ($11,900) reward, donated by a Belfast-based business, for information leading to the recovery of her daughter.