Man executed for killing wife decades ago in Memphis 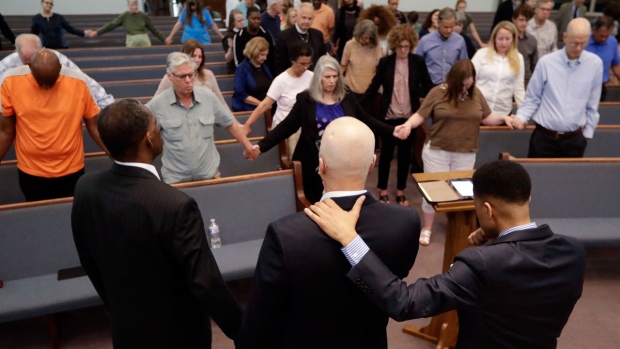 People pray during a vigil for Donnie Johnson at Riverside Seventh-Day Adventist Church, Thursday, May 16, 2019, in Nashville, Tenn. Johnson was executed by lethal injection Thursday for suffocating his wife, Connie Johnson, in a Memphis camping center that he managed in 1984. The vigil was held at the church where Johnson served as an elder while in prison, even though he was never able to visit the church. (AP Photo/Mark Humphrey)

NASHVILLE -- A man convicted of killing his wife decades ago at a camping centre he managed in Memphis was put to death Thursday in Tennessee.

Sixty-eight-year-old inmate Don Johnson was executed via lethal injection inside a maximum-security Nashville prison for the 1984 suffocation of his wife, Connie Johnson.

In his dying moments, the religious inmate uttered a long prayer, asking for forgiveness. He asked the warden if he could sing, and he sang two hymns. The last words observers could hear were "no more dying here." He was pronounced dead at 7:37 p.m.

Johnson had initially blamed his wife's slaying on a work-release inmate who confessed to helping dispose of the body and who was granted immunity for testifying against Johnson.

Johnson had spent half his life on death row and seen three execution dates come and go as his appeals played out in court, including challenges to Tennessee's lethal injection protocols. The state's present default method is a three-drug combination that includes the sedative midazolam, which inmates have claimed causes a prolonged and excruciating death. Three more executions are scheduled for later this year in Tennessee.

Gov. Bill Lee announced Tuesday that he would not intervene , following "prayerful and deliberate consideration" of Johnson's clemency request.

Religious leaders, including the president of the worldwide Seventh-day Adventist Church, to which Johnson belongs, had asked Lee to spare Johnson's life. Supporters of clemency said Johnson had undergone a religious conversion and cited his Christian ministry to fellow inmates. Johnson was an ordained elder of the church in Nashville.

Connie Johnson's daughter, Cynthia Vaughn, said she'd forgiven Johnson and joined in the request for clemency. Other relatives had sent a letter to the governor asking that the execution move forward. "I ask you to please bring justice to our family after 35 years of exhausted heartache, sorrow, and emptiness," wrote the victim's sister, Margaret Davis.

On Wednesday, the inmate's attorneys made public a statement from Johnson to his son, stepdaughter and other members of Connie Johnson's family in which he begged for their forgiveness. "I am truly sorry and if I knew something that I could do to ease your pain I would gladly do it," Johnson wrote.

Defence attorneys said Thursday that the inmate declined to request a special last meal, instead asking supporters to provide a meal to a homeless person. The Nashville church where the inmate is an ordained elder was collecting grocery gift cards for a meal next week for the homeless and planned a vigil as the execution hour loomed.

Alabama administered a lethal injection Thursday evening to 41-year-old Michael Brandon Samra. He and a friend, Mark Duke, were convicted of capital murder in the deaths of Duke's father, the father's girlfriend and the woman's two elementary-age daughters in 1997 after a dispute over use of a pickup truck.