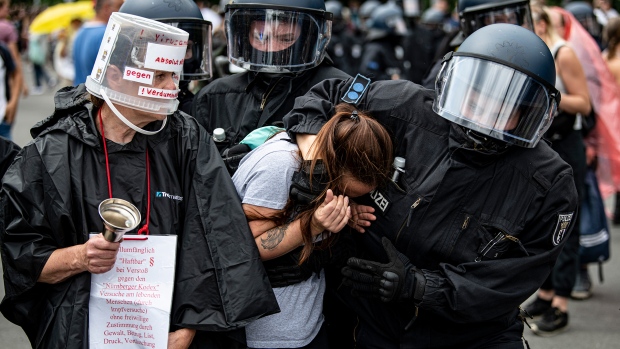 Police arrest a demonstrator at an unannounced demonstration at the Victory Column, in Berlin, Sunday Aug. 1, 2021, during a protest against coronavirus restrictions. Hundreds have turned out in Berlin to protest the German government’s anti-coronavirus measures despite a ban on the gatherings, leading to arrests and clashes with police. (Fabian Sommer/dpa via AP)

BERLIN (AP) -- The German government on Monday condemned an outburst of violence at weekend protests in Berlin against the country's anti-coronavirus measures.

More than 60 police officers were injured, some of them severely, police said. At least one journalist was also injured.

It was not clear how many protesters were injured, but Berlin police said a 48-year-old man died after being detained by officers during Sunday's protests.

The man had complained of tingling in his arm and chest while officers checked his ID. Officers provided first aid to the man until an ambulance arrived and took him to the hospital, where he later died, police said.

Berlin prosecutors said later on Monday that a routine investigation into the man's death appeared to show that he died of a heart attack. They also said in a statement that before police had checked the man's ID, he had broken through a police block, knocking down and injuring an officer who then subsequently chased him down and detained him.

“Violent clashes and the abuse of the right to protest are not acceptable,” government spokeswoman Ulrike Demmer said.

Among those injured was Joerg Reichel, the head of the Berlin branch of German journalists union dju. Reichel was pulled from his bike, beaten and kicked by protesters, Berlin daily Tagesspiegel reported.

Demmer said the attack on Reichel was “completely incomprehensible and must be condemned.”

The group Reporters without Borders cited attacks on reporters in Germany during anti-lockdown protesters in its annual World Press Freedom Index that ranked the country two places lower than in 2020.

Almost 1,000 people were temporarily detained during the demonstrations, which saw outbursts of violence as protesters defied orders to disperse and tried to break through police lines in various parts of the capital. Police opened investigations against 503 of them, including 59 cases of resisting police and 43 cases of assaulting officers.

Germany has relaxed many of the measures imposed during the height of the pandemic, but some requirements to wear masks indoors and present negative COVID-19 tests or certificates of vaccination are still in place.

A spokesman for Germany's Interior Ministry said experience had shown that far-right extremists have tried to join such coronavirus protests in the past.