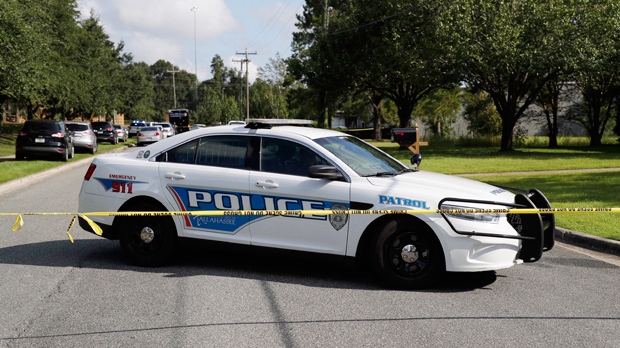 TALLAHASSEE, Fla. -- An employee at a construction supplies business had gotten into an argument with co-workers and been ordered by a supervisor to leave when he stabbed five people before being fought off, authorities in Florida's capital city said.

Investigators were still trying to understand what specifically set off the suspect, identified by Tallahassee police as Antwann Brown, 41, to pull out a pocket knife and begin stabbing co-workers.

“It appeared that he actually sought out certain victims,” interim Police Chief Steven Outlaw said during a news conference yards from the business where the stabbings took place.

The five victims were taken to an area hospital.

One victim was in serious condition, two were in fair condition and another two were in good condition, said Tallahassee Memorial Healthcare spokeswoman Danielle Buchanan.

Brown was apprehended not far from Dyke Industries, which supplies doors and windows to residential and commercial customers, where police said he had worked for just over three months.

Outlaw said there was no indication of any pending employment actions against Brown. A company representative didn't immediately return a request for comment.

Police said Brown clocked in at about 8 a.m. as he normally should. Minutes later, “he was engaged in some kind of dispute at work,” Outlaw said, “and clocked out at 8:20.”

Outlaw would not elaborate on what the dispute was about. The dispute remained a verbal one until the suspect returned and began attacking co-workers with a small knife, he said.

Other co-workers fended Brown off with sticks and whatever they could grab. They pinned him down, but he escaped. Officers arrested him outside the facility, the chief said.