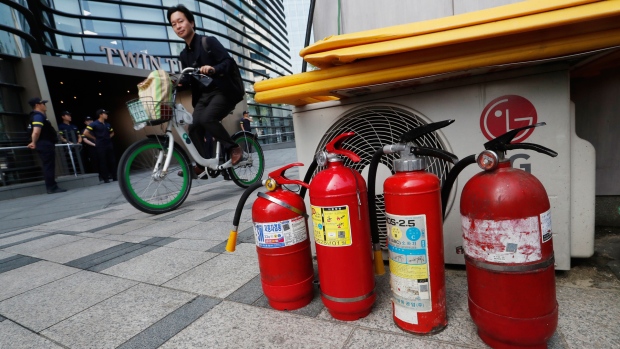 Fire extinguishers are placed near a building where the Japanese embassy is located in Seoul, South Korea, Friday, July 19, 2019. South Korean police say a man has set himself on fire in front of the Japanese Embassy in Seoul amid rising trade disputes between Seoul and Tokyo. (AP Photo/Ahn Young-joon)

SEOUL, Korea, Republic Of - A South Korean man set himself on fire in front of the Japanese Embassy in Seoul on Friday, police said, amid rising trade disputes between Seoul and Tokyo.

The man in his 70s ignited a fire inside his car parked in front of the building where the Japanese Embassy is located, Seoul police said in a statement.

Police said the man survived and was taken to a hospital but was unable to communicate. South Korean media reported the man, surnamed Kim, is unconscious.

The motive for his action wasn't immediately known. Police said suspected flammable materials were found in the man's car. They said they are examining the car and surveillance cameras and interviewing building officials.

The man's self-immolation comes as ties between Seoul and Tokyo have plunged to their lowest point in decades since Japan recently tightened export controls of some high-tech materials.

South Korea and Japan, both key U.S. allies, have been often embroiled in history and territory disputes stemming from Japan's 1910-45 colonial rule of the Korean Peninsula.

For decades, largely peaceful anti-Japan protests have occurred near the Japanese Embassy. Protests sometimes turned violent, with demonstrators cutting their own fingers or scuffling with police officers.

In 2017, a South Korean Buddhist monk died after setting himself ablaze in protest of Seoul's 2015 agreement with Tokyo to settle an impasse over Korean women forced into sex slavery for Japanese soldiers during the colonial occupation.