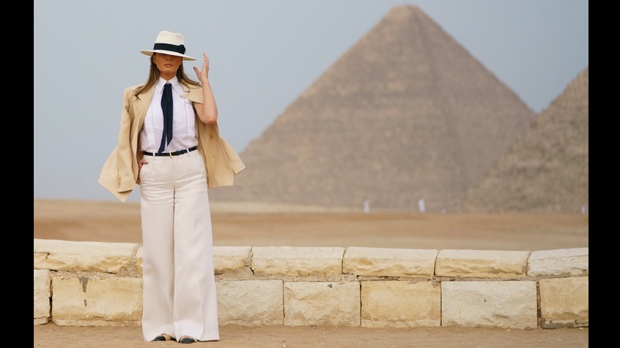 First lady Melania Trump reaches for her hat as she pauses for media during a visit to the historical Giza Pyramids site near Cairo, Egypt on Saturday, Oct. 6, 2018. Trump is visiting Africa on her first big solo international trip. (AP Photo/Carolyn Kaster)

Mrs. Trump, who was interviewed by ABC while touring Africa last week, said people are just spreading rumours about her marriage.

She insisted allegations of her husband's infidelities are not a concern.

Trump has denied the trysts with Daniels and McDougal but has acknowledged reimbursing his lawyer for a $130,000 hush money payment made to Daniels. Mrs. Trump has generally kept quiet on the subject.

Asked in the ABC interview if she loves her husband, Mrs. Trump said, “Yes, we are fine. Yes.”

She played down a suggestion the repeated rumours of his philandering had put a strain on their marriage.

“It is not concern and focus of mine,” she said. “I'm a mother and a first lady, and I have much more important things to think about and to do.”

But when she was asked if the repeated rumours had hurt her, she paused. Then she reiterated the “media world is speculating.”

“Yeah, it's not always pleasant, of course,” she said. “But I know what is right and what is wrong and what is true and not true.”

Portions of Mrs. Trump's interview aired Friday on “Good Morning America.” Her full interview is set to air Friday night in an ABC News special, “Being Melania - The First Lady.”

Other portions of the interview aired earlier this week featured Mrs. Trump saying she could be “the most bullied person” in the world and saying women who make accusations of sexual assault need to “show the evidence.”

Donald Trump, on the 2005 “Access Hollywood” tape that became public during the 2016 campaign, says when he's attracted to beautiful women, “I just start kissing them. It's like a magnet.” He said when you're a star, women let you.

Trump's former personal lawyer Michael Cohen pleaded guilty in August to campaign finance violations alleging he, Trump and the National Enquirer tabloid were involved in buying the silence of Daniels and McDougal after they alleged affairs with Trump.