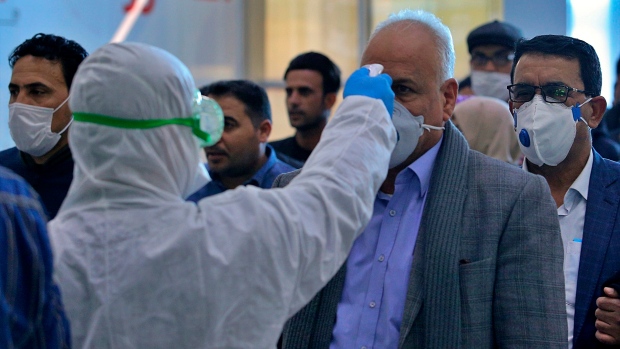 Medical staff checking passengers arriving from Iran in the airport in Najaf, Iraq, Friday, Feb. 21, 2020. Iraqi authorities are taking precautions at Najaf and other Iraqi airports, as well as at the border gates with Iran, after the discovery of the new virus that emerged in China in Iran. (AP Photo/Anmar Khalil)

TEHRAN, Iran -- Iran's health ministry raised the death toll from the new coronavirus to eight Sunday, amid concerns that clusters there as well as in Italy and South Korea could signal a serious new stage in its global spread.

There were now 43 confirmed cases of the illness in Iran, health ministry spokesman Kianoush Jahanpour told state TV. That's a jump from a Saturday's total of 28 confirmed cases and six fatalities.

The outbreak in Iran has centred mostly on the city of Qom, but spread rapidly over the past few days to people in four other cities, including the capital, Tehran. Iranians also went to the polls on Friday for nationwide parliamentary elections, with many voters wearing masks and stocking up on hand sanitizer.

Iran is already facing diplomatic and economic isolation under U.S. pressure. The virus threatens to isolate Iran even further, with some countries now barring their citizens from travelling there.

Authorities shuttered schools in 10 provinces across the country for at least two days starting Sunday. Tehran University also suspended classes and shuttered its dormitories for several days. Those who live in student dorms were asked to return to their home towns and continue classes through the internet where possible.

Soccer fans across the country won't be allowed to attend matches, and shows in movie theatres and other venues were suspended until Friday. Authorities have begun daily sanitization of Tehran's metro, which is used by some 3 million people, and public transportation cars in the city.

Iran reported its first cases of the virus on Wednesday, announcing that same day that two elderly people had died from the virus in Qom. Schools and religious seminaries in the Shiite holy city were closed.

Iran's Health Minister Saeed Namaki told state TV that officials were nearly certain the virus came from China to Qom in central Iran. He also said that among those who'd died from the virus was a merchant who regularly shuttled between the two countries using indirect flights in recent weeks, after Iran stopped direct passenger flights to China.

He did not say when the merchant had returned from China to Iran nor what steps health officials had taken to quarantine and check on those he'd come into contact with.

Namaki, however, defended the government's handling of the outbreak, saying it was being “transparent.” He said it would help make face-masks and sanitizers available for Iranians, amid concerns that stocks were running low in the capital's pharmacies.

Iran is also producing kits for diagnosis of the infection, he added.

“We obviously do not recommend travelling to Qom and other pilgrimage cities,” Namaki said. The city is a major destination for pilgrims inside Iran and from abroad.

Iran has also set up 36 screening stations at different ports of entry to the country to check for possibly infected travellers, he added.

Iraq and Pakistan, which share borders with Iran, have already taken preventive measures to limit the spread of the virus from Iranian travellers. Iraq has barred Iranians from entering the country, impacting thousands of religious pilgrims and businessmen.

Officials in the Pakistani province of Baluchistan, which has a long frontier with Iran, declared an emergency as they seek to stop the spread of the virus. They suspended almost all traffic across the Taftan border crossing with Iran.

Turkey temporarily closed its land border with Iran due to coronavirus Sunday, according to Turkish Health Minister Fahrettin Koca. Turkey is yet to record a case of coronavirus.

Eight people have been refused entry to Turkey from Iran since Friday, when Turkey introduced health checks on travellers at frontier crossings, Koca said in Istanbul.

Jordan also began denying entry of non-Jordanians coming from Iran and South Korea on Sunday. That's in addition to the previous ban on those coming from China. Jordanians arriving from those countries will be quarantined.

Infected travellers from Iran already have been discovered in Lebanon and Canada.

Lebanon's first case of the new virus was discovered on a flight from the Iranian city of Qom this week.

Saudi Arabia has ordered anyone travelling from Iran to wait at least 14 days before entering the kingdom as it seeks to prevent the spread of the virus to the Muslim pilgrimage sites of Mecca and Medina. It has also barred its residents and citizens from travelling to Iran and China.

Kuwait has also suspended flights to Iran and is barring ships from Iran from docking at its ports. Kuwait said it is evacuating 750 Kuwaiti citizens on five flights. Kuwait's state-run news agency reported on Saturday that Kuwait health officials were sent to Iran, in co-ordination with Iranian counterparts, to conduct medical checks on Kuwaitis departing Iran, but that Iranian authorities denied the Kuwaiti health officials entry.