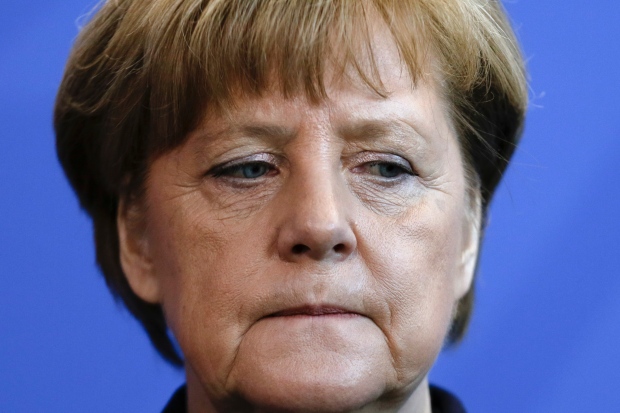 German Chancellor Angela Merkel talks to media during the presentation of a science and innovation report at the chancellery in Berlin, Germany, Wednesday, Feb. 17, 2016. (AP Photo/Markus Schreiber)

BERLIN -- Chancellor Angela Merkel said Wednesday that it's in Germany's national interest for Britain to remain in the European Union, and she also pressed her fellow European leaders to work with Turkey to curb the migrant influx.

An EU summit on Thursday and Friday aims to reach an agreement on a package of measures to keep Britain in the 28-nation bloc, and Merkel hopes to make some headway toward an elusive European solution of the migrant crisis.

Germany is the EU's most populous -- and economically powerful -- nation and also has taken in the most refugees. But Merkel's open-door stance to asylum-seekers has been under increasing pressure both from abroad and at home, including from within her own conservative bloc.

In a speech to parliament, Merkel painted a largely positive picture of chances of an agreement on Britain's EU reform demands, which she said are in many cases "justified and understandable." British Prime Minister David Cameron hopes to secure a deal for a looser union with the bloc. He then plans to hold a referendum on whether Britain should stay in the EU.

"Germany will make its contribution so that a result that satisfies everyone can be achieved, if possible already at the summit beginning tomorrow," she said.

"I am convinced that is in our national interest for Great Britain to remain an active member in a strong and successful European Union," she added.

Merkel said Britain is an ally for Germany in promoting competitiveness and free trade, and that "Europe needs Great Britain's foreign and security policy commitment to assert our values and interests in the world."

On migrants, Merkel made clear that she won't be pushing the contentious subject of new quotas to distribute migrants around Europe. She reiterated that it would be "laughable" for Europe to approve such quotas when it has barely started to share refugees under existing agreements.

Instead, she said, the key issue is to work with Turkey to try to stem the flow of migrants across the Aegean Sea to EU member Greece rather than shutting down Greece's northern border with Macedonia. Some 850,000 people made the sea crossing to Greece last year, with over 150,000 more arriving by boat in Italy and far smaller numbers elsewhere.

"Our common goal is to drastically and lastingly reduce the number of refugees so as to better help those people who really need our assistance," she said.

"We as the European Union must learn to protect maritime borders," Merkel said. "If we don't learn, we won't succeed next time with Italy, across the sea from Libya."

"A continent that doesn't manage that and only reacts by sealing (borders) off just behind the maritime border, and says 'we're not interested in whoever is behind the fence' -- I am convinced that can't be the European answer," she said.

Despite all the difficulties, Merkel offered an optimistic outlook for this week's meeting -- though she said that "the discussion on both issues won't be ended with the summit."

The meeting "is a stage on the road that, so far, has made Europe stronger after every crisis," she said. "And I hope that can be the case this time, too."

David Rising contributed to this report.