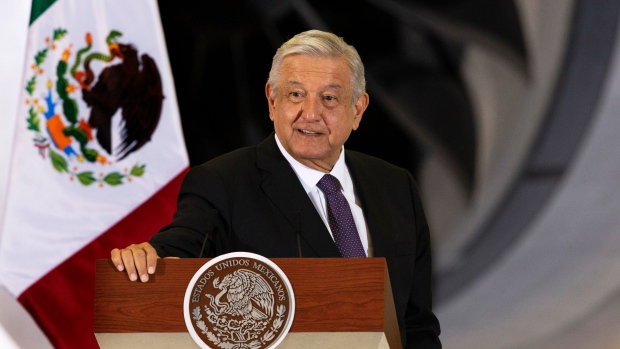 In this July 27, 2020 file photo, Mexican President Andres Manuel Lopez Obrador gives his daily, morning press conference in front of the former presidential plane that has been for sale since he took office, at Benito Juarez International Airport in Mexico City. (AP Photo/Marco Ugarte, File)

MEXICO CITY - Mexican President Andres Manuel Lopez Obrador said Tuesday he will ask the Senate to schedule a referendum on whether to investigate and possibly bring charges against his predecessors, including almost all of Mexico's living ex-presidents.

Lopez Obrador proposed the referendum for June 6, 2021, the date of midterm congressional elections that are key for holding on to Lopez Obrador's bare majority in Congress.

The referendum could be a way of drawing voters to the polls, because midterm votes in Mexico often have low turnout, and it could deflect attention from the current administration's problems with the economy and coronavirus pandemic, by focusing attention on past abuses.

Lopez Obrador views the referendum as an indictment of corruption, conservative economic programs and privatizations, not just what he claimed was “systematic corruption” since 1988.

“The social and humanitarian disasters we have suffered in this country over the last 30 years were the result of a series of conscious acts by those who governed during this period,” Lopez Obrador said. “The evils I have enumerated did not occur by chance, but rather were the result of the application of a model over five presidential terms ... this tragic stage in the life of the country is called the neoliberal era.”

Acts of corruption can be punished under current law, but it is unclear whether Lopez Obrador can investigate former leaders for policy decisions he disagrees with, like the widespread privatizations of government companies carried out by Carlos Salinas de Gortari, who governed Mexico from 1988 to 1994.

The president appeared to equate those policies with corruption; insiders were often given sweatheart deals on government contracts or privatizations.

“In the neoliberal period, corruption became the main function of political power,” he said. In the past, Lopez Obrador had shied away from delving into past presidents' misdeeds, saying “revenge is not my strong point” and “forgive and forget.”

The only living president not mentioned by Lopez Obrador is 98-year-old Luis Echeverria.

A specialized prosecutor's office filed charges against Echeverria for a 1968 student massacre, but a tribunal exonerated him in 2007.

Separately, supporters of Lopez Obrador's Morena party have been trying to collect about 2 million signatures on a petition to hold the referendum by Tuesday's deadline. The president said Tuesday he expected they would get that number.