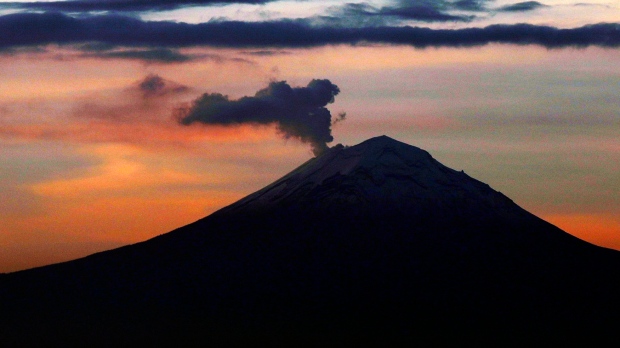 A plume of ash and steam rise from the Popocatepetl volcano, as seen from Mexico City, Wednesday, June 19, 2019. (AP Photo/Marco Ugarte)

MEXICO CITY (AP) -- A woman mountain climber in Mexico died and a climbing companion was injured when they scaled the highly active, off-limits peak of the Popocatepetl volcano.

Mexico’s volunteer Mountain Rescue and Assistance Brigade confirmed Friday that the climbers fell into a gully about 1,000 feet (300 meters) from the volcano’s crater, suggesting they had reached the crater or near it.

The crater of the 17,797-foot (5,426-meter) tall volcano has been belching toxic fumes, ash, and lumps of incandescent rock persistently for almost 30 years.

Civil defense authorities have strictly prohibited climbers from going within 7.5 miles (12 kilometers) of the peak since it began erupting again in 1994.

Valentín Martínez Castillo, the mayor of the nearby town of Ozumba, identified the dead woman as a 22-year-old resident of the town.

Martínez Castillo wrote in his social media accounts that the climbers fell about 150 feet (50 meters) down a gully, and that the woman's body and the surviving climbers had been successfully removed from the peak.

The Mountain Rescue and Assistance Brigade posted a notice on their social media Friday reading: “She shouldn't have died. Don't put your life or those of others at risk. The Popocatepetl volcano is closed.”

The country's National Disaster Prevention Center said it “calls on people not to go near the volcano, especially the crater, due to the risk of falling ballistic fragments.”

Popocatepetl is located 45 miles (72 kilometers) southeast of Mexico City, and occasionally showers ash on surrounding towns and some parts of the capital.