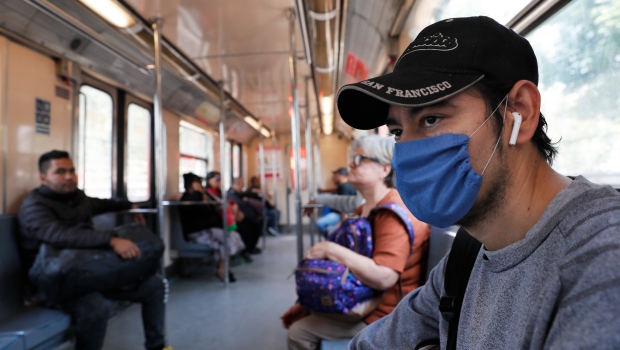 A man wears a protective mask as a precaution against the spread of the new coronavirus in the metro in Mexico City, Friday, Feb. 28, 2020. Mexico's assistant health secretary announced Friday that the country now has confirmed cases of the COVID-19 virus. (AP Photo/Marco Ugarte)

Hugo Lopez-Gatell said one of the patients is in Mexico City and the other in the northern state of Sinaloa. While a second test is still pending on that case, he said, “We are treating this as confirmed.” Neither is seriously ill; one is in isolation at a hospital, the other is isolated at a hotel.

At least five family contacts of the first patient have been placed in isolation. He said the men had travelled to the northern Italian region where there has been an outbreak and had returned to Mexico between last Friday and Saturday.

President Andres Manuel Lopez Obrador appeared to downplay the seriousness of the COVID-19 virus, saying “it isn't even equivalent to flu.”

Seasonal flu kills more people because it has infected far more people, but the new virus appears to have a far higher mortality rate.

In the central China city of Wuhan, where the new coronavirus first exploded, 2% to 4% of patients have died, according to the World Health Organization. But in the rest of China, the death rate has been 0.7%. On average, the death rate from seasonal flu is about 0.1%.

“I repeat, according to the available information, it is not something terrible, fatal,” Lopez Obrador said. “There shouldn't be any yellow journalism, or exaggerations, to cause a mass psychosis of fear, of terror.”

Brazil on Wednesday confirmed Latin America's first confirmed case of the new coronavirus in a man who travelled to Italy this month.

Lopez-Gatell also said that Mexico's traditional culture of hearty handshakes, friendly hugs and kisses as a form of greeting must change.

Lopez-Gatell drew a chuckle from the president when he suggested replacing those greeting with a self-hug -a gesture that Lopez Obrador frequently uses in front of large crowds when he can't greet people individually.

The Roman Catholic Bishops Conference in Mexico said in a statement Friday that Mass-goers should substitute verbal for physical greetings when exchanging the ritual expressions of peace, and that communion wafers should be placed in parishioners' hands rather than their mouths, both as preventive measures.

Mexico's Health Department said the case in Mexico City involved a 35-year-old Italian man who lives in the Mexican capital, while the Sinaloa case involves a 41-year-old resident of Hidalgo state.

The confirmed cases shifted attention from the long-suffering passengers of the MSC Meraviglia, which had been turned away from two ports before docking in Mexico's Caribbean coast resort of Cozumel on Thursday. The passengers were finally allowed off the ship on Friday after health checks found influenza, but no cases of the new coronavirus, in a crew member and passenger.

Some of the roughly 4,580 passengers went ashore in Cozumel on Friday, according to MSC Cruises, which said it will offer passengers 100 per cent refunds of cruise fares “due to the disruptive nature of their vacation.”

“Spirits, overall, were high - especially in light of the difficult situation that had developed over the previous day,” according to the company.

The ship was scheduled to depart Cozumel late Friday and return to its home port of Miami, Florida on Sunday.