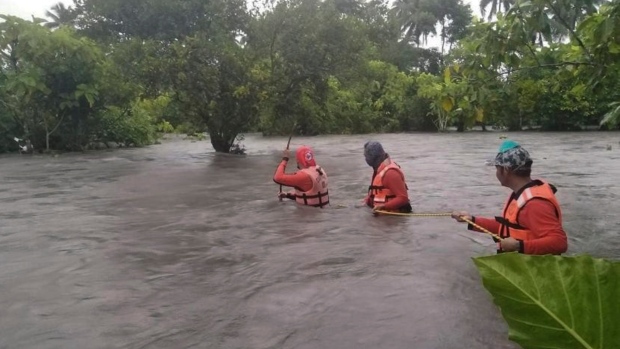 Officials said they struggled to open more emergency shelters in order to allow social distancing among the displaced residents and prevent evacuation camps from turning into epicenters of COVID-19 infections. In the hard-hit city of Marikina in the capital region, nearly 15,000 residents were evacuated to safety overnight as waters rose alarmingly in a major river.

“This situation will be too difficult if there won't be a permanent solution to flooding, especially now with the threat from the delta variant,” Marikina Mayor Marcelino Teodoro told ABS CBN News, referring to the highly contagious COVID-19 viral strain that has been detected in the country.

Many of the residents were evacuated from flood-prone villages in Marikina overnight, depriving them of sleep, said Teodoro. He blamed years of illegal logging in nearby mountains and heavy siltation in Marikina River for constant flooding in his city.

In the mountainous northern city of Baguio, a resident died Friday afternoon after the taxi she was riding in was hit by a falling tree, police said, adding two other people in the taxi were injured. The northern Philippines has been swamped by days of monsoon rains that flooded low-lying villages and set off minor landslides.

Typhoon In-fa, which has churned off the country's eastern coast and dumped rain on Taiwan before blowing toward China, intensified the seasonal downpours, forecasters said.

A cargo boat overturned after being lashed by strong waves Saturday close to a port in Pio Duran town in Albay province, southeast of Manila. Its 10 crewmen were rescued by police, firefighters and villagers, who used a long rope to pull the overturned boat closer to the coast, the coast guard said.

Coast guard personnel rescued several residents trapped in their houses by rising floodwaters Friday in Naujan town in Mindoro Oriental province south of Manila. As they carried the villagers through waist-high waters, the emergency crew held on to a rope to prevent themselves from being swept away by the current.

About 20 typhoons and storms batter the Philippines each year, aside from seasonal monsoon rains. The country also lies in the so-called Pacific “Ring of Fire,” a region prone to earthquakes and volcanic eruptions, making it one of the world's most disaster-prone nations.