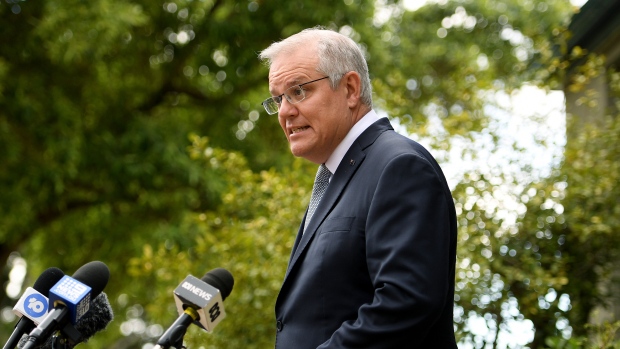 CANBERRA, Australia (AP) -- Australia's Prime Minister Scott Morrison said on Tuesday the country is set to reduce emissions by 35% below 2005 levels by 2030, but he won't commit to such a target at the U.N. climate conference in Scotland.

Morrison said his government would stick with Australia's current 2030 target of reducing emissions by 26% to 28% below 2005 levels. The targets were adopted at the Paris climate conference in 2015 and are relatively modest compared to other wealthy countries' ambitions.

"We will meet it and we will beat it," Morrison said, referring to the 2030 target.

"We'll beat it with emissions reductions we believe of up to 35% and we may even achieve better," he added.

Australia had already reduced emissions by more than 20% from 2005 levels, he said.

The country will commit to a target of net zero carbon emissions by 2050 at the Glasgow conference.

Morrison's conservative Liberal Party-led government was narrowly reelected in 2019 with a climate policy that opposed the 2050 net zero target adopted by the opposition center-left Labor Party.

Australia is one of the world's largest exporters of coal and liquified natural gas. Morrison said his net zero plan would not shut down Australia's coal or gas production or increases costs to households and businesses.

"It is not a revolution but a careful evolution to take advantage of changes in our markets," Morrison said.

Policy levers include investment in technologies and incentives. At least 20 billion Australian dollars ($15 billion) would be invested in low-emissions technology by 2030.

Morrison was a Cabinet minister in 2014 when a newly-elected government repealed Australia's two-year-old carbon tax. Government climate policies since have rejected any measures that would make polluters pay for their emissions.

The government has yet to release economic and climate modeling behind the plan.

Getting to the net zero commitment took political wrangling on the part of Morrison's ruling party, including winning the support of a rural-based junior coalition member -- the Nationals party -- with a number of concessions.

One of them was that Resources Minister Keith Pitt, who maintains Australia will continue exporting coal for decades, was made the fifth Nationals' Cabinet minister. Morrison on Monday announced Pitt's promotion.

The conditions also include a government review every five years of the economic impacts of the net zero target outside major cities. The first assessment would be delivered in 2023.

Finance Minister Simon Birmingham described the reviews as a "health check" on how various parts of Australia were being effected by the transition to net zero.

"What it will do is focus the minds of the government of the day very clearly on where additional investments may be necessary to help ensure the transition," Birmingham said.

British Prime Minister Boris Johnson, who will host the upcoming summit in Glasgow, known as COP26, congratulated Australia on its net zero ambition.

"That was very difficult for Australia because Australia's very heavily dependent on coal, on lots of carbon-producing industries, and they've done a heroic thing," Johnson said, referring to the 2050 commitment.

However Australia is likely to be criticized in Glasgow for its relatively weak 2030 target. The United States has committed to reductions of between 50% and 52% below 2005 levels. Britain has pledged to cut emissions by 68% below 1990 levels.

Climate experts slammed Australia's target for 2030 as insufficient compared to the U.N.'s call for a 45% reduction globally, and the `net zero' goal for 2050 as unworkable with current policies.

Bill Hare, director of Climate Analytics, which tracks countries' emissions targets, said a recent study by the group found Australia would likely already achieve a 35% reduction with action at state level on renewable energy, land use and electric vehicles.

By further electrifying transportation, reducing emissions from the power and natural gas sectors, and clamping down on deforestation and land clearance, Australia could achieve 48% cuts by 2030, said Hare.

The nation is one of the world's worst greenhouse gas emitters per capita because of its heavy reliance on coal-fired power.

Hare accused Morrison of "a slick advertising move with no content but a very nice glossy report" that continues to promote fossil fuels, relies on unproven technologies and does little to address the concerns of low-lying nations in the region who fear rising sea levels from global warming.

"Scott Morrison said our Pacific island neighbors would like this plan," he said. "I very much doubt that."

Opposition spokesman on climate change and energy, Chris Bowen, said the net zero strategy was "not a plan, it's a scam."

Greenpeace Australia said the government's net zero plan was "built on the lie that you can grow the fossil fuel industry while decarbonising the economy."

COP26 will assess progress since nations agreed in the 2015 Paris accord to limit warming to less than 2 degrees Celsius (3.6 degrees Fahrenheit). The meeting in Glasgow is widely seen as the last chance to hold global warming to 1.5 C (2.7 F) above pre-industrial levels.