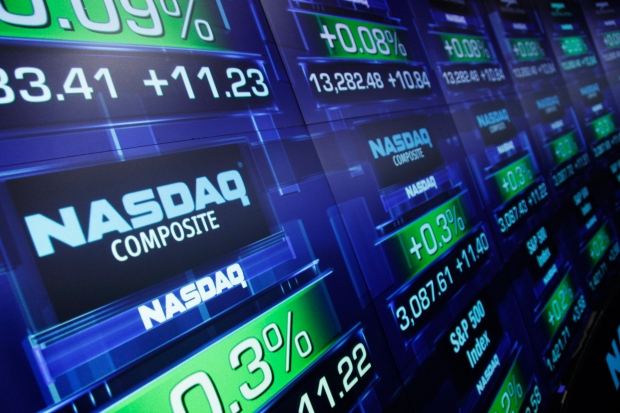 In this Tuesday, Aug. 21, 2012, photo, stock prices are shown at the Nasdaq MarketSite in New York. (AP Photo/Mark Lennihan, File)

Nasdaq is pushing for the more than 3,000 companies listed on its U.S. stock exchange to make their boardrooms less overwhelmingly male and white by hiring directors that better reflect the country's diverse population.

The company filed a proposal Tuesday with the Securities and Exchange Commission that, if approved, would require all companies on the exchange to disclose the breakdowns of their boards by race, gender and sexual orientation. Companies that do not comply could be delisted, or kicked off the exchange.

The proposal would also require most Nasdaq-listed companies to have at least two diverse directors or, if they cannot meet the mandate, to explain why not. That could include one board member who is female and one who is either an underrepresented racial minority or LGBTQ. Foreign companies and smaller companies would have additional flexibility in satisfying this requirement with two female directors.

Nasdaq's plan ups the stakes in what was already a widening push by shareholders and governments around the world for more diversity on corporate boards, which often are composed of mostly white men.

It's not just a sense of fairness. Proponents say greater board diversity can improve financial performance for companies - and ultimately their stock prices - by bringing in varying opinions and voices and fostering a better understanding of employee and customer bases.

In its proposal, Nasdaq cited a report from the Carlyle Group investment company, which found that companies it invested in that have at least two diverse board members have nearly 12% more earnings growth per year than the average of companies that lack diversity.

Companies have heard the criticism and made some moves toward increased diversity, but progress has been slow.

Women hold just 23.1% of board seats at companies in the Russell 3000, a broad index that includes most of the U.S. stock market. That's up from about 15% in 2016, according to executive-data firm Equilar.

Progress in improving racial diversity on boards has been slower. One difficulty is that tracking racial and ethnic diversity has been tougher than measuring gender diversity, with companies often not disclosing such data, something that Nasdaq hopes its proposal can help ameliorate.

“Corporate diversity, at all levels, opens up a clear path to innovation and growth,” Nelson Griggs, president of the Nasdaq Stock Exchange, said in a prepared statement.

The SEC declined to comment on Nasdaq's proposal specifically, but it has made diversity a greater emphasis and released its first diversity and inclusion strategic plan earlier this year.

”We welcome dialogue on how to improve diversity, inclusion and opportunity in the financial services sector and our economy more broadly,” SEC Chairman Jay Clayton said in a statement.

Shareholders are increasingly pushing companies to improve their board diversity, both in public and in private. Big investors are trying to cajole executives through private channels. For example, Nuveen, which invests $1.1 trillion globally, has been pushing a group of smaller and mid-sized companies without a woman on their board to add one. It's seen more than 30% of them add a woman, as of 2019.

In public, investors are getting more chances to vote at companies' annual meetings on shareholder resolutions seeking more disclosures on the makeup of the board.

Governments are also requiring improved disclosures or mandating better representation. California was a high-profile example when it required all publicly held companies headquartered in the state to have at least one female director by the end of 2019, the first state with such an edict. After California, other states quickly considered following suit.

Such efforts have met some resistance, though.

In Illinois, state Rep. Emanuel “Chris” Welch introduced a bill that would have required publicly held companies headquartered in the state to have at least one female director and one African American director on the board by the end of 2020.

“I never expected a push for diversity to cause one of the most hotly debated bills on the floor of the year,” said Welch, a Democrat. But that's what he said happened.

Early opposition came from manufacturers, who worried they may need to kick someone off the board who was not a woman or an African American to comply. That could invite a separate claim of discrimination, even though manufacturers support diversity throughout the business, said Mark Denzler, president and CEO of the Illinois Manufacturers' Association.

The final bill, signed into law last year, no longer had the diversity mandate. Instead, it required only that companies report each year on their boards' racial and gender breakdowns. Denzler's group was neutral on the final bill.

At the U.S. Chamber of Commerce, officials were supportive of Nasdaq's proposal on Tuesday. Tom Quaadman, executive vice-president at the chamber's centre for capital markets competitiveness, called it a “business led solution to resolving diversity issues on corporate boards.”

“This proposal will help accelerate the developments that are already underway and is a positive and balanced way to get to the end result of allowing boards to be more representative of a business's consumer and employee base,” he said in a statement.

The Nasdaq's U.S. exchange is dominated by technology companies, but there are many financial, biotech and industrial companies as well.

Nasdaq began in 1971 with the world's first electronic stock market and is home to many of the tech world's most iconic companies, including Apple, Microsoft, Amazon and Google's parent company. In 2016, Adena Friedman became its CEO, the first woman to lead a major U.S. exchange