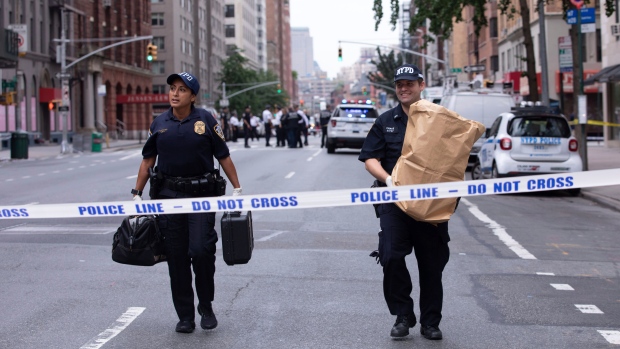 An investigator carries away a suspicious package as evidence after it was thought to be an explosive device in Manhattan's Chelsea neighborhood Friday, Aug. 16, 2019, in New York. The scare happened about two hours after two abandoned objects that looked like pressure cookers prompted an evacuation of a major transit hub in lower Manhattan. The police bomb squad later determined they were not explosives. (AP Photo/Kevin Hagen).

Chief of Detectives Dermot Shea tweeted Saturday morning that a man seen holding one of the rice cookers in surveillance video was taken into custody.

The discovery of the cookers Friday led to an evacuation and roiled the morning commute.

Police said cameras near the World Trade Center captured a man with a cart putting cookers in two locations in the subway station.

A third cooker of the same type was later discovered 2 miles (3 kilometres) away on a sidewalk.

Authorities determined they were not explosives. Pressure cookers can be turned into bombs.

Police say they didn't have details on the man's apprehension. No charges have been announced.