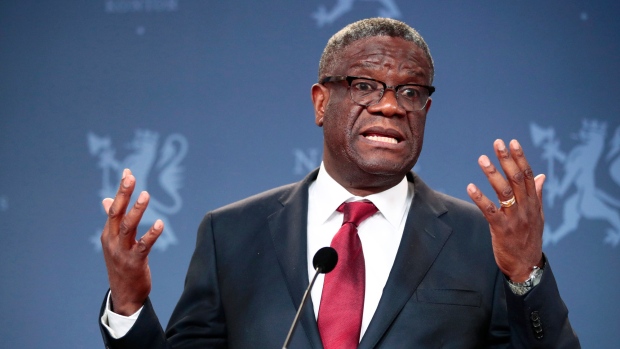 FILE - In this Dec. 11, 2018, file photo, Nobel Peace Prize laureate Dr. Denis Mukwege speaks to the media during a news conference in Oslo, Norway. The Nobel Peace-prize winning surgeon whose hospital in war-torn Congo has treated over 50,000 victims of sexual violence has launched a fund with the goal of providing reparations for survivors of conflicts around the world. (Lise Aserud/NTB scanpix via AP, File)

The Nobel Peace Prize-winning surgeon whose hospital in war-torn Congo has treated over 50,000 victims of sexual violence has launched a fund with the goal of providing reparations for survivors of conflicts around the world.

Dr. Denis Mukwege said in an interview Saturday that he and his team at Panzi Hospital in eastern Bukavu province could physically and mentally help victims of rape and other abuse, but that the only way to really heal survivors is for society to accept the wrong that was done to them through reparations.

Legal action can be taken against an alleged perpetrator, he said, but even in cases in which women win, “there is no reparation.”

Mukwege said reparations can be individual or collective, symbolic or financial, depending on the victim, the case and the context.

“In some cases, women are just asking us to ask the leaders to ... say, 'I apologize for what just happened to you because I was maybe the leader in this place and I didn't protect you,”' Mukwege said. “Then maybe for the women, this can be enough.”

But in other cases, women might want financial reparations to support them, to pay for school, or to return to previous activities or start new ones, he said, “so this fund really works in different ways, depending with the conflicts.”

“For 10 years I was fighting to get a global fund,” Mukwege said, “because ... what is happening in Congo is happening everywhere where we have conflict.”

The fund is trying to get governments and the private sector to give money, he said, but its board will also include victims of sexual violence and civil society representatives.

France is the first country to commit to the fund, pledging $2 million a year for three years in an important show of support, Mukwege said.

Mukwege is in New York on a tour organized by Doctors of the World, a longtime funder of the Panzi Hospital. It will also take him to California and Washington state to talk to foundations about the fund.

Mukwege is also planning to meet several world leaders and attend events on the sidelines of the upcoming annual gathering of presidents, prime ministers and monarchs at the U.N. General Assembly.

Female victims around the world face similar challenges, Mukwege said, and he has recently seen how sexual violence survivors from the Bosnian war have overcome their problems, “and how they can help Congolese women to help face this big problem.”

He also travelled to South Korea to see the “comfort women” used as sex slaves by Japanese soldiers in World War II and visited Colombia and victims of that country's long civil war. He plans to start programs for victims of sexual violence in the Central African Republic and Burundi, he said.

Mukwege shared the 2018 Nobel Peace Prize with Nadia Murad, a Yazidi woman who was raped by Islamic State militants in Iraq and has become a global advocate for victims of sexual violence.

“She and I are working together,” he said. “I was in Iraq to see exactly what was happening there, and I hope that this year, I will start to support Yazidi women.”

The program will operate in different camps where the Yazidis are, not in the Sinjar region where Islamic State extremists stormed Yazidi communities in 2014, Mukwege said.

Having spent much of his life treating female victims of sexual violence, Mukwege said, “today my policy is to work more with men because I think that it is very important in talking about a positive masculinity.”

“We are really in a patriarchal system where men dominate everything and women are treated just as objects,” he said. “We need to change our way to treat women and see women in our society and ... let young boys grow up to respect women and understand that women are equal to men - and this has to start very early.”