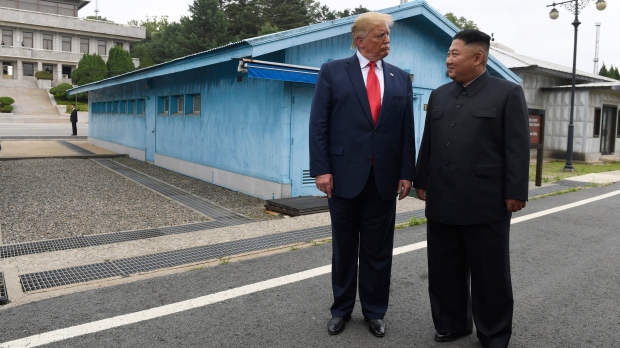 SEOUL, Korea, Republic Of - North Korea on Thursday said the United States has proposed a resumption of stalled nuclear negotiations in December as they approach an end-of-year deadline set by North Korean leader Kim Jong Un for the Trump administration to offer an acceptable deal to salvage the talks.

He said North Korea has no interest in talks if they are aimed at buying time without discussing solutions. He said the North isn't willing to make a deal over “matters of secondary importance,” such as possible U.S. offers to formally declare an end to the 1950-53 Korean War, which was halted by a cease-fire, not a peace treaty, or establish a liaison office between the countries.

“If the negotiated solution of issues is possible, we are ready to meet with the U.S. at any place and any time,” said Kim Myong Gil, who called for Washington to present a fundamental solution for discarding its “hostile policy” toward North Korea.

“If the U.S. still seeks a sinister aim of appeasing us in a bid to pass the time limit - the end of this year - with ease as it did during the DPRK-U.S. working-level negotiations in Sweden early in October, we have no willingness to have such negotiations,” he said, using the abbreviation of North Korea's official name, the Democratic People's Republic of Korea.

Nuclear negotiations have faltered since a February summit between Kim Jong Un and President Donald Trump in Vietnam collapsed after the U.S. side rejected North Korean demands for broad sanctions relief in exchange for a partial surrender of its nuclear capabilities.

The working-level talks last month in Sweden broke down over what the North Koreans described as the Americans' “old stance and attitude.”

Kim Myong Gil, who was North Korea's lead negotiator at the Stockholm talks, said Stephen Biegun, Trump's special envoy for North Korea, proposed via an unspecified third country to hold another round of talks in December.

“I cannot understand why he spreads the so-called idea of DPRK-U.S. relations through the third party, not thinking of candidly making direct contact with me, his dialogue partner, if he has any suggestions or any idea over the DPRK-U.S. dialogue,” Kim Myong Gil said of Biegun. “His behaviour only amplifies doubts about the U.S.”

In a separate statement attributed to another senior official, North Korea demanded that the United States scrap a planned U.S.-South Korean military drill to keep the momentum alive for dialogue.

Responding to comments by U.S. Defence Secretary Mark Esper, who said Washington could possibly modify its military activities with Seoul to make room for diplomacy, North Korean official Kim Yong Chol said he would like to consider Esper's remarks as U.S. intention to “drop out of the joint military drill or completely stop it.”

Esper spoke hours after North Korea's State Affairs Commission, its supreme decision-making body, lashed out at the planned allied drills and warned that Washington will face a “greater threat” if it ignores Kim Jong Un's deadline.