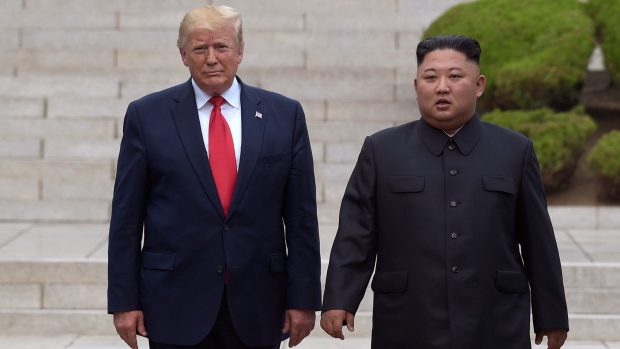 President Donald Trump, left, meets with North Korean leader Kim Jong Un at the North Korean side of the border at the village of Panmunjom in Demilitarized Zone, Sunday, June 30, 2019. (AP Photo/Susan Walsh)

SEOUL, Korea, Republic Of -- North Korea says diplomatic talks with the United States could resume in a "few weeks," but it will not consider abandoning its nuclear weapons unless external threats are fully removed.

A statement Monday attributed to a North Korean foreign ministry official says the upcoming working-level talks will be decisive in determining the fate of the country's diplomacy with Washington.

Negotiations have stalled since a February summit between North Korean leader Kim Jong Un and President Donald Trump in Hanoi, Vietnam, collapsed over disagreements over sanctions relief in exchange for disarmament measures.

The statement says discussions of North Korea's denuclearization will only be possible when "threats and hurdles endangering our system security and obstructing our development are clearly removed beyond all doubt."