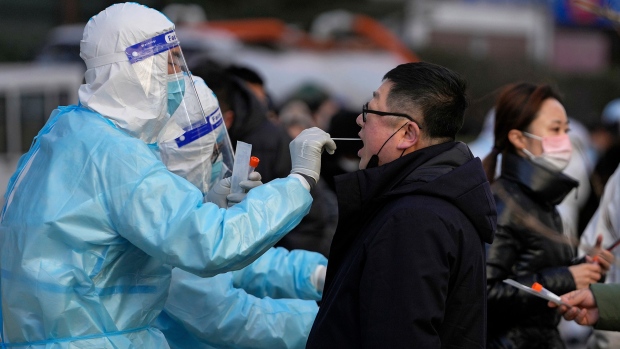 A man gets a throat swab for the COVID-19 test at a mobile coronavirus testing facility outside a commercial office buildings in Beijing, Monday, Jan. 17, 2022. Beijing's first reported case of the omicron variant has prompted stepped-up measures in the nation's capital, just weeks before it hosts the Winter Olympic Games. (AP Photo/Andy Wong)

(CNN) -- At an office building in China's capital on Sunday, masked Covid control personnel lugged boxes of pillows and bedding through the closely guarded entrance for white collar workers stuck inside, preparing for what may be days of lockdown as Beijing rushes to prevent the spread of Omicron ahead of the Winter Olympics.

The snap lockdown meant the building in the west of the city was sealed off without advance warning, with everybody inside unable to leave and subject to compulsory Covid testing. The decision to lock the office down came after an employee tested positive for Omicron on Saturday -- the city's first recorded case of the highly transmissible variant.

For the past week, officials in Beijing had been on high alert as an Omicron outbreak spread in Tianjin, a major port city just 30 minutes away by high-speed rail. The cluster had already spread to two other cities hundreds of miles away.

According to detailed surveillance data collected by officials, the Beijing woman infected with Omicron had not come into contact with a confirmed case and hadn't left the capital in the past 14 days, raising fears the variant may already be spreading in the community.

Unlike most of the world, China is pursuing a zero-Covid strategy that relies on stringent restrictions including mass testing, lockdowns and long quarantine for international arrivals.

The single case in Beijing has been identified at the worst possible time for the city, as it prepares to welcome thousands of athletes for the Olympics -- including from countries where Omicron is raging.

The risk of the variant spreading among the local Beijing population outside its so-called Olympic bubble -- intended to keep participants separate from the wider public -- comes as authorities warned of the "double pressure of domestic and imported cases."

After the woman's case was confirmed, authorities sprang into action, imposing uncompromising snap lockdowns -- trapping people in places such as office blocks -- and extensive contact tracing and testing in high-risk areas.

The residential compound where the confirmed case lives is just 15 minutes' drive from Olympic Park. The entire community has since been sealed off while people get tested and authorities conduct environmental sampling. CNN staff who drove past the complex over the weekend saw large barriers in place to prevent anybody from coming or going.

The residents inside are allowed fresh air, in contrast to stricter lockdowns in other parts of the country that confine people to their apartments -- but they can't leave the community limits. Trash is beginning to pile up inside the complex, with only specially-designated disposal teams permitted to handle it. Many nearby businesses are closed.

The woman's workplace has been similarly locked down, with large tents set up outside to conduct and process Covid tests for everybody inside until the building is declared safe to reopen.

In another sign of the zealous official response, the woman's travel history was published in state media, with extensive detail on everywhere she went within a two-week period. The long list includes subway stations, public bathrooms, a supermarket, a luxury shopping center and Dior store, a famous Peking duck restaurant, a cinema, a hair salon, a stand-up comedy venue, and even a ski park.

More than 16,000 people linked to those locations have been tested with all results coming back negative so far, authorities said on Monday -- and the city has yet to report any further cases. At a news conference, authorities raised the possibility the woman might have contracted the virus after handling international mail.

Chinese officials have repeatedly blamed imported goods for causing local outbreaks. However, the risk of surface transmission of Covid-19 is low in comparison to airborne transmission, according to the US Centers for Disease Control and Prevention (CDC). The virus dies "rapidly" on porous surfaces but can persist longer on hard, indoor surfaces, the CDC said last year.

After news of the single Beijing case emerged, many schools in affected districts moved students to online learning this week, and the city has closed a number of scenic spots and temples. Starting January 22, all arrivals to the capital must undergo Covid testing both in advance and after arrival.

And despite the imminent arrival of thousands of Winter Olympians for the start of the Games on February 4, Beijing has moved to suspend dozens of international flights. From Wednesday, all flights from the United States to China have been either canceled or are likely to be suspended.

Athletes and staff are mostly taking special flights restricted to people with Olympic credentials as part of the "closed loop" bubble, which covers all stadiums, competition venues, accommodation and catering, and has its own transport system.

Wang Guangfa, a respiratory expert at Peking University First Hospital, said the situation was still difficult to gauge since authorities don't know where the woman was infected. "It is very possible that new cases will emerge if the cause is unclear," he said, according to state-run tabloid Global Times.

Though any additional infections could spark more restrictions in the coming days, there is no need to overreact to a single case, which wouldn't impact the Olympics, Wang added.

The Beijing public seemed to share his sentiments, with crowds turning out for winter festivities over the weekend in sharp contrast to the localized lockdowns in some districts. On Sunday, many families flocked to a popular lake to ice skate on its frozen waters.

In addition to Beijing, a growing list of cities across China are also struggling to tamp down Covid outbreaks and the Omicron threat. The variant was first detected in the community in Tianjin on January 8 and has since been found in seven other cities, including Beijing.

Many cities are now imposing restrictions such as shutting down public spaces and banning dine-in services at restaurants, as well as suspending air travel to the capital.

Posts and videos on Chinese social media show several targeted snap lockdowns in Shanghai last week, trapping whoever was unfortunate enough to be in the vicinity. In one mall, shoppers were stuck for two days, with officials testing everybody inside and ordering a deep clean before reopening.

One video posted on social media showed a woman outside the mall, crying and reaching out to a small toddler staring back from behind its glass doors.

The measures may seem extreme -- but they remain broadly popular among much of the Chinese public, the vast majority of whom are able to enjoy life as normal.

And with such high stakes, authorities aren't taking any chances, knowing all eyes are focused on Beijing as the Games approach.