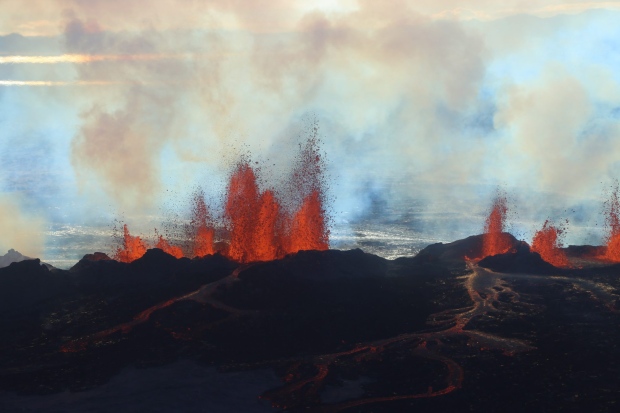 In this aerial view, fountains of lava, up to 60 meters high, spurt from a fissure in the ground on the north side of the Bardarbunga volcano in Iceland, Tuesday, Sept. 2, 2014. (AP /Stefano Di Nicolo)

REYKJAVIK, Iceland -- Iceland officials say the eruption of the Bardarbunga volcano that began in August has come to an end.

Officials said Saturday the area will be closely monitored for any changes that might pose a threat to the population.

The announcement came after several weeks in which the seismic activity has been gradually subsiding.

Officials said the threat level of possible disruption to air travel has been downgraded. There had been fears the eruption could cripple commercial air traffic.

Scientists warned there is still gas contamination in the area surrounding the eruption site.

The announcement was made by the Icelandic Met Office along with civil protection experts and the Environmental Agency of Iceland.