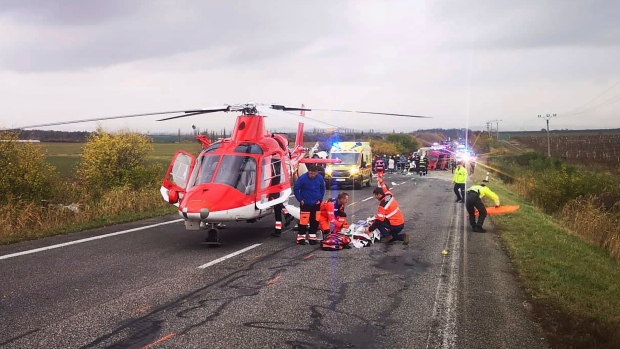 Emergency services helicopter at the scene after a bus collided with a truck Wednesday Nov. 13, 2019, near the town of Nitranske Hrnciarovce, Slovakia, Wednesday Nov. 13, 2019. Officials say at least 13 people have died in the accident with about 20 injured, some seriously. (HaZZ-Presidium of Fire and Rescue Corps via AP)

BRATISLAVA, Slovakia - A bus collided with a truck in Slovakia on Wednesday, killing at least 13 people and injuring at least 20 more.

The accident occurred in Nitranske Hrnciarovce near the city of Nitra, 100 kilometres (60 miles) east of Bratislava, the capital, police and firefighters said.

Slovak Prime Minister Peter Pellegrini called it a “horrible tragedy” and said he was cutting short his visit to Cyprus and heading to the scene.

He offered his condolences to the relatives of the victims.

Firefighters said the number of dead and injured still might rise. They say the truck was loaded with stones.

Photos from the scene published by the police showed an overturned truck on the road surrounded by gray stones and the bus on its side in a roadside ditch.

Further details were not immediately available.