One person remains critical after cruise ship mayday off Norway 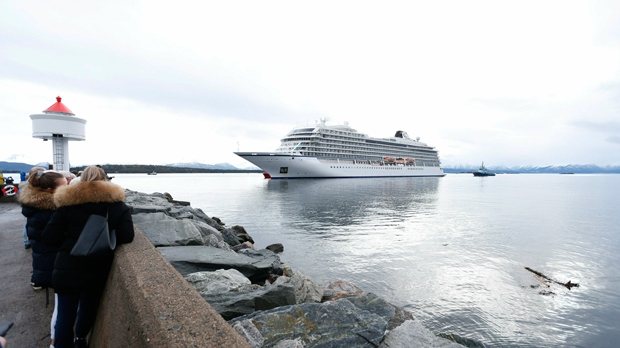 The cruise ship Viking Sky arrives at port off Molde, Norway, Sunday March 24, 2019, after having problems and issuing a Mayday call on Saturday in heavy seas off Norway's western coast. Rescue helicopters took more than 475 passengers from a cruise ship that got stranded off Norway's western coast in bad weather before the vessel departed for a nearby port under escort and with nearly 900 people still on board, the ship's owner said Sunday. (Svein Ove Ekornesvag/NTB scanpix via AP)

COPENHAGEN -- The Norwegian pilot on the cruise ship carrying more than 1,300 people that was caught in a hefty storm off the coast of Norway said Tuesday the situation worsened when engine problems appeared.

Inge Lockert told the Vesteraalen newspaper that “everything went as it should until we got engine problems.”

“It was a very big team effort” he told the daily. “When we got the engine running again, we realized we were going to save ourselves.”

Lockert did not reply to requests for comment by The Associated Press.

The ship, Viking Sky, made a mayday call Saturday afternoon after the engine failures. Five helicopters winched off 479 passengers, and the airlift evacuation went well into Sunday.

The operation was halted later Sunday when the ship's engines restarted and the vessel limped into a nearby port with the nearly 900 passengers and crew remaining onboard.

A total of 36 people was admitted in local hospitals and as of Tuesday, one person was in critical but stable condition in an intensive care ward. Seven others were expected to be discharged later Tuesday, hospital officials said.

Lockert was one of two pilots from the Norwegian Coastal Administration who boarded the ship on Saturday to help the crew take the ship into port, the Vesteraalen daily said. Only Lockert has spoken publicly.

The identity of the captain - a Finn - is not known.

On Monday, Norwegian officials said they have opened an investigation into the ordeal.

The ship was on a 12-day cruise along Norway's coast before its scheduled arrival Tuesday in Britain. The passengers were mostly an English-speaking mix of American, British, Canadian, New Zealand and Australian citizens.

Passengers rescued from the Viking Sky cruise ship are helped from a helicopter in Hustadvika, Norway, Saturday March 23, 2019. A cruise ship with engine problems sent a mayday call off Norway's western coast on Saturday, then began evacuating its 1,300 passengers and crew amid stormy seas and heavy winds in a high-risk helicopter rescue operation. (Odd Roar Lange/NTB Scanpix via AP)