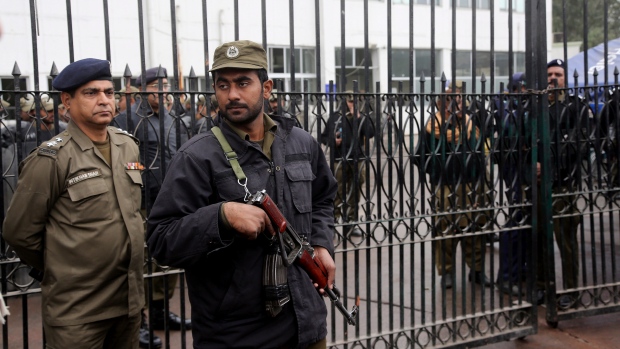 Pakistani police officers stand guard at a hospital which was stormed by lawyers in Lahore, Pakistan, Thursday, Dec. 12, 2019. Pakistan leveled "treason" charges against 250 lawyers who were part of a mob that stormed a hospital in the eastern city of Lahore the previous day, kicking and punching doctors and staff and trashing equipment and property, police said. (AP Photo/K.M. Chaudary)

LAHORE, Pakistan -- Pakistan on Thursday levelled "treason" charges against 250 lawyers who were part of a mob that stormed a hospital in the eastern city of Lahore the previous day, kicking and punching doctors and staff and trashing equipment and property, police said.

Three patients at the hospital died when physicians and medical staff left them unattended for several hours, to flee and escape the mob, officials said.

The exceptionally high level of charges reflects the authorities' frustration over the violence. The incident drew nationwide condemnation and the government says those linked to the violence will be tried in anti-terrorism courts and that maximum punishment will be sought for them.

The mob of about 500 lawyers -- apparently angered over alleged misbehaviour by some of the hospital doctors toward one of their colleagues the month before -- stormed the Punjab Institute of Cardiology on Wednesday, punching and beating doctors and other staff.

They also beat the doctors and medics with sticks, and smashed windows, doors and medical equipment at the only government-run heart hospital in the province of Punjab.

A police vehicle was burned near the hospital while several cars and motorcycles were damaged in the parking area of the facility. Police say they had to use tear gas to disperse the mob. The situation took several hours to bring under control.

Under Pakistani laws, assaults on government buildings and other property can carry the charge of treason. Such cases are then handled by anti-terrorism courts, which were primarily set up by to try suspects linked to acts of terrorism.

It wasn't immediately clear how many of the charged 250 lawyers are in custody.

"We have arrested some lawyers and no one linked to the attack on the hospital will be spared," said Zulfikar Hameed, the city's police chief.

Additional police forces were deployed on Thursday to the hospital as the staff went on a partial strike, demanding harsh action against all those who had attacked the hospital.

Lahore police were carrying out raids Thursday to sweep up all who were part of the mob. Meanwhile, representatives of the lawyers announced a strike of their own against what they claim was one-sided police action against them.

Authorities say tension had been brewing between the city's lawyers and doctors since November when one Lahore lawyer reported to the police that he was mistreated by the doctors when he brought an ailing relative to the hospital. It was unclear what the mistreatment involved.