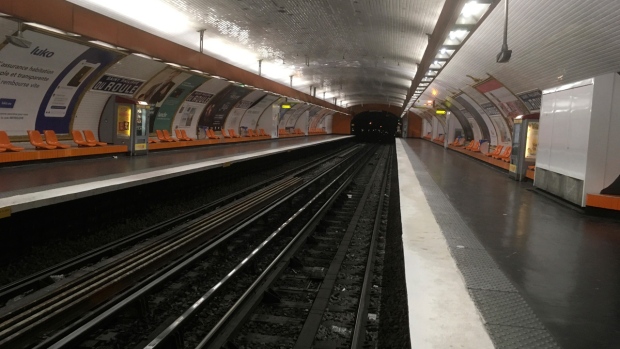 French unions were protesting plans for sweeping pension changes by President Emmanuel Macron's government that aim to create a universal pension system, instead of having different pension rules for different jobs. Critics say that will do away with some transport workers' right to retire early. The fight against the pension changes now includes plans for pilots, nurses and lawyers to strike and protest Monday.

Paris public transport company RATP said 10 metro lines were closed Friday and several others, including the RER suburban rail, were severely disrupted. The French capital was crippled by traffic jams at rush hour Friday morning. Many Parisians and tourists used city bikes and electric scooters, or simply walked, to get around. Bus and tram schedules were also disrupted.

Messages in French and English on train and bus platforms warned passengers about the strike, the biggest in 12 years. The few trains still circulating were noticeably less crowded than usual.

The ride-hailing company Uber hoped to capitalize on the disruptions by offering two 15-minute rides free on the Jump electric bikes and scooters it has placed around the city.

RATP employees were protesting a pension change planned for next year that critics say will make them work longer before retirement. RATP employees are among the French workers who benefit from a special pension regime that currently allows them to retire on a full pension earlier than most other French workers.

Macron says the planned changes would make the public pension system “fairer.” He has promised the legal retirement age will remain at 62 but new conditions will encourage people to work longer before retiring. The government also wants to apply the same rules to all new retirees order to replace the 42 different retirement systems specific to certain jobs.

At Le Vesinet, west of Paris, commuter Benjamin Royoux said he was “rather pleasantly surprised” to find that there were trains every 15 minutes. But Royoux, who uses his electric scooter in downtown Paris, was worried there could be more strikes.

Paris City Hall employee Catherine Reine, also waiting for a train at Le Vesinet, said she supports the strike “because (transport workers) are very afraid for their future.”

A junior transport minister, Jean-Baptiste Djebbari, told reporters Friday that “today there are several special regimes and one general regime that is not sustainable financially, everyone knows that.”

The pension changes will be formally presented and debated in parliament next year, following a three-month consultation with unions and employers' groups.

Lawyers, who also benefit from a special pension system, are planning to strike Monday. Several left-wing unions are also planning demonstrations on Sept. 21 and 24 in Paris over the pension changes.