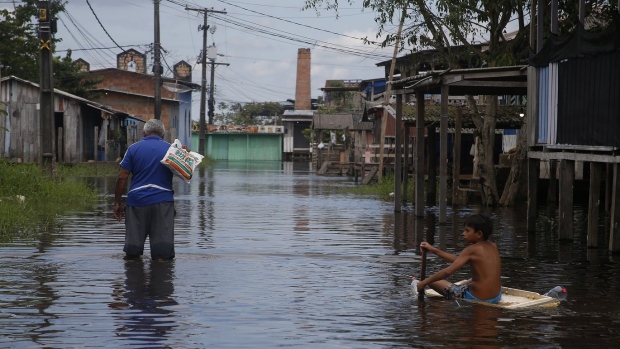 A boy uses a fridge door to float across a street flooded by the rise of the Negro river in Iranduba, Amazonas state, Brazil, Monday, May 23, 2022. The Amazon region is being hit hard by flooding with 35 municipalities that are facing one of their worst floods in years and the water level is expected to rise over the coming months. (AP Photo/Edmar Barros)

IRANDUBA, Brazil (AP) — For the second straight year, inhabitants of Brazil's Amazon rainforest are being overwhelmed by flooding, with hundreds of thousands of people already affected by waters that are still rising.

Heavy rainfall in the Amazon over the past two years is associated with the La Nina phenomenon, when Pacific Ocean currents affect global climate patterns, and which scientists say is intensified by climate change.

Manaus, the Amazon’s largest city, began tracking flood levels in 1902 and has seen seven of its worst floods over the past decade, including this year's.

“Unfortunately, severe floods have been happening over and over in the past decade," Luna Gripp, a geosciences researcher who monitors the western Amazon’s river levels for the Brazilian Geological Survey, told The Associated Press in a text message. "It is confirmation that extreme climate events are increasing greatly.”

In Brazil’s Amazonas state alone, an estimated 367,000 people have been affected by rising waters, the state's civil defense authority says.

The Negro River reached a depth of 29.37 meters (96 feet) Monday at the measuring station in Manaus, compared to the record 30.02 meters registered last year.

“I faced last year’s flood, and now I’m dealing with the 2022 flood,” said Raimundo Reis, a fisherman who lives with his son in Iranduba, a city across the river from Manaus.

He is using wooden planks to improvise an elevated floor inside his home and stay above the water.

“River-dwelling life is what you see — lots of difficulties and unfulfilled promises. Politicians only come here in the election season,” said Reis, who has not received any help from the government.

Peak flooding in Manaus typically occurs around mid-June, and it takes weeks — sometimes months — to subside. Last year, the Negro River remained above the 29-meter flood line for 90 days.

Flooding causes significant damage to agriculture, traditionally done in the Amazon close to riverbanks where soil is more fertile, the head of the state’s civil defense authority, Charlis Barros, told AP by phone. That makes food distribution one of the most urgent needs at the moment, he said.