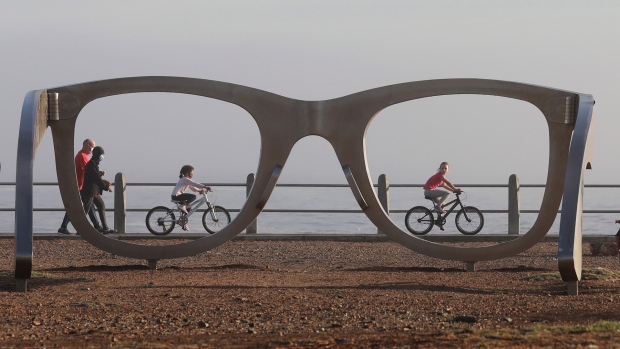 People exercise on the promenade in Cape Town, South Africa, Friday May 1, 2020 as the government began a phased easing of its strict lockdown measures in a bid to cut down on the spread coronavirus. For the first time in five weeks, people were permitted to walk outside for exercise between 6 a.m. and 9 a.m. (AP Photo/Nardus Engelbrecht)


Mogomotsi Magome, The Associated Press
Published Friday, May 1, 2020 7:48AM EDT

JOHANNESBURG -- South Africa began easing one of the world's strictest lockdowns on Friday, with runners and dog-walkers returning eagerly to the streets but not all wearing the face masks that are now mandatory in the country with Africa's most coronavirus cases.

In Johannesburg, Cape Town and elsewhere, people took a breath of fall air and some headed to the malls to buy warm clothes for winter, which brings a new challenge in combating the virus: flu season.

People are now permitted to leave their homes for exercise between 6 a.m. and 9 a.m. A night curfew is in place from 8 p.m. until 5 a.m. Public transport, including trains and buses, can operate with restricted numbers of passengers. But the ban on domestic and international travel remains.

Even with the easing, sales of liquor and cigarettes remain banned, which some have criticized as puritanical. But health officials warn that smoking might exacerbate respiratory problems experienced with COVID-19. The ban on alcohol sales has reduced brawls and traffic accidents, according to police.

Friday is Workers' Day and ordinarily South Africa marks it with rallies by trade unions and political parties, but these are not possible this year.

But some workers found the return of business enough reason to celebrate. ““We were badly affected by the lockdown but fortunately we are open now. We had to listen to the leaders because this is a very difficult time,” said Cameron Elihaz, who owns a cellphone repair and accessories shop in Johannesburg.

According to officials, schools should reopen in phases starting June 1 with the first batch being Grade 7 and Grade 12 pupils, the oldest classes in primary and secondary schools, respectively. But teachers' unions have protested, saying schools should not reopen until safe conditions can be assured.

There is no date for when higher education institutions will open, with the sector increasingly looking towards online learning.

President Cyril Ramaphosa has emphasized that his government is trying to balance the need to curb the spread of the virus with pressure to minimize economic hardships in one of the world's most unequal countries.

Ramaphosa earlier announced a $26 billion socio-economic relief package as millions of informal workers have suffered. Unemployment is expected to soar above the 29% that existed before the virus arrived.

South Africa has conducted more than 200,000 coronavirus tests. Officials say they will watch for areas of high concentrations of cases where they will implement targeted isolation measures.