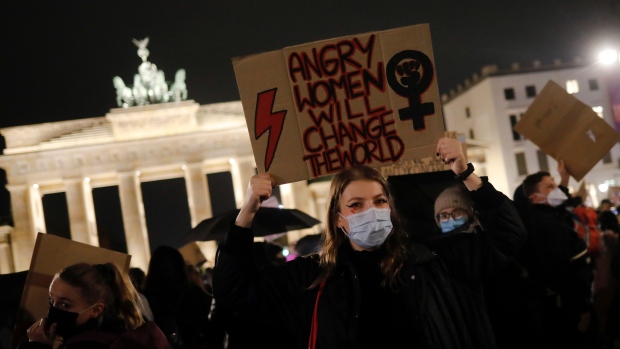 A woman from Poland shows a poster as she attends a protest against recent tightening of Poland's restrictive abortion law, in front of the Brandenburg Gate in Berlin, Germany, Thursday, Oct. 29, 2020. (Photo/Markus Schreiber)

WARSAW, Poland - Thousands of people were converging late Friday on a downtown Warsaw roundabout, for what women's rights activists vowed would be the largest in nine days of mass protests against a near-total ban on abortions in Poland. They chanted obscenities against the government.

There was a strong police presence on the streets of Warsaw, amid reports that far-right groups fired flares at protesters in the “March on Warsaw” and in other cities where demonstrations were also taking place.

Protesters ignored pandemic restrictions which ban public gatherings of more than five people, and disregarded government to stay at home due to skyrocketing coronavirus infections. The nation of 38 million has hit new records for confirmed cases almost daily this week, including the 21,600 confirmed cases reported Friday.

The national public prosecutor threatened criminal charges against protest organizers for “causing an epidemiological threat,” a charge that carries a prison sentence of up to eight years.

Klementyna Suchanow, one of the key organizers with the Poland's Women's Strike initiative, said she and many others refused to be deterred by either the virus or the authorities because they believe they are fighting for a fundamental right.

“This is about the freedom and dignity of people,” Suchanow said. “The will of people to protest should be a lesson for anyone who wants to impose authoritarian ways.”

Among security forces on the streets Friday evening were military gendarmes deployed to guard the parliament building.

The protests were triggered by an Oct. 22 ruling by Poland's constitutional court that abortion in cases of severe fetal deformities was unconstitutional.

Poland already had one of Europe's most restrictive abortion laws. Forged by political and Catholic Church leaders in 1993, it allowed abortion only in the cases of fetal defects, risk to the woman's health and pregnancies resulting from crimes - incest or rape.

The law has been often described as a compromise between those seeking liberal abortion regulations and the church, which favours a total ban. However, neither side has ever been satisfied with the 1993 law, and women's groups demanding greater reproductive rights say it struck no balance at all.

The recent ruling leaves only the woman's health or pregnancy resulting from crimes as legal reasons for abortion.

Earlier attempts by the country's conservative ruling party to change the law to ban all abortions also prompted enormous street protests, including in 2016 and 2017.

This time, the Law and Justice party's leadership appears to have calculated that it could change the law with less of a backlash by getting a court under its political control to do it during the pandemic. If that was the case, the plan has backfired for now, though it remains to be seen how long the protests will keep going or if they lose public support eventually.

The protests have included people disrupting church services and spray-painting slogans on churches last Sunday. Young protesters also chanted obscenities directed at the ruling party and the church. The actions offended many people in the largely Catholic nation, even some who disagree with the court ruling.

Law and Justice leader Jaroslaw Kaczynski has since called on supporters to defend churches. And state broadcaster TVP, which is used as a party mouthpiece, has condemned the protesters, repeatedly calling them “left-wing fascists.” During a Thursday evening broadcast, TVP compared them to totalitarian regimes that oppressed the church.

Health Ministry figures show that 1,110 legal abortions were carried out in Poland in 2019, mostly because of fetal defects.

Polish women seeking abortions get them in Germany or other nearby nations, or illegally in Poland.