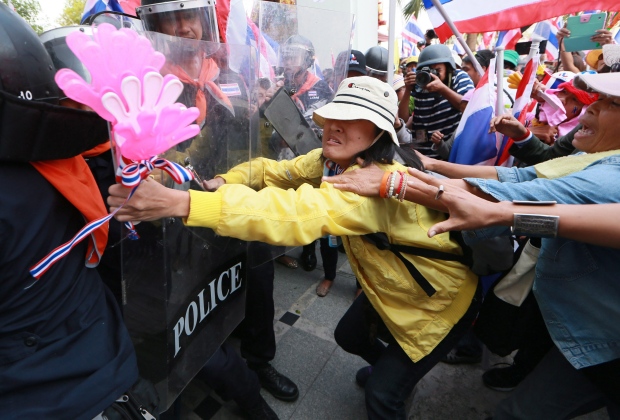 Thai anti-government protesters, right, push through line of riot police during a rally at the Department of Special Investigation (DSI) on the outskirts of Bangkok, Thailand, on Monday, Dec. 23, 2013. (AP Photo/Wason Wanichakorn)

BANGKOK, Thailand -- Thai police staged a protest Monday to show their frustration after weeks of dealing with aggressive and often violent anti-government demonstrators, with officers saying that the order for them to show restraint has left them vulnerable and humiliated.

About 500 police with family and friends gathered in a public square near the main protest camp in Bangkok, four days after a policeman was shot dead in a pitched battle with demonstrators who were trying to stop candidates from registering for February elections.

Police came to mourn the officer but also to complain that they were not properly equipped or organized to defend themselves. They're also protesting restraint on their use of force they say allowed demonstrators to humiliate them.

The demonstrators are demanding the government of Prime Minister Yingluck Shinawatra make way for an appointed council to institute political reforms to eradicate corruption before any polls.

At least eight people have been killed in sporadic violence since the demonstrations began about two months ago. At the government's orders, police have responded with relative restraint despite severe provocation.

Police Col. Niwat Puenguthaisri, who led the gathering, said police were worried for their own safety because of lack of protective gear for many and poor riot control planning. Most police are allowed to carry only batons and riot shields, while selected officers are equipped with tear gas canisters and guns to fire rubber bullets.

Orders to show restraint has resulted in police several times being trapped by demonstrators and forced to bargain for their release.

Monday was a rare day of calm in Bangkok, though protesters continued to block candidate registrations in about half-a-dozen southern provinces, which are strongholds of the opposition Democrat Party. If there is a failure of elections in a number of constituencies, it may not be possible to get enough lawmakers to legally open Parliament.

The Democrats are boycotting the polls, claiming that to contest them would disappoint their supporters who want political reforms. The government says the opposition is boycotting the election because it knows it cannot win.

The street demonstrators, who call themselves the People's Democratic Reform Committee and are closely allied with the Democrats, have vowed to shut down Bangkok after the New Year if Shinawatra does not step down as caretaker.