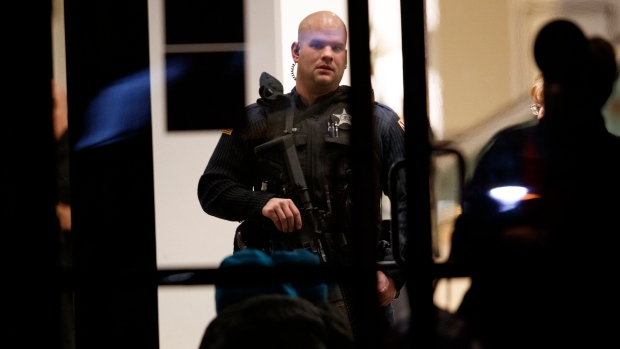 Authorities work the scene where a gunman shot and killed a man near the food court inside the Orland Square Mall, Monday, Jan. 21, 2019, in Orland Park, Ill. (Armando L. Sanchez/Chicago Tribune via AP)

ORLAND PARK, Ill. -- A man identified by authorities Tuesday as the suspect in the fatal shooting of a teenager at a suburban Chicago mall was previously convicted of armed robbery and had been an acquaintance of the victim.

Orland Park Police identified the suspect as 19-year-old parolee Jakharr Williams of University Park. The department said in a news release that Williams, who fled after the shooting and has not been arrested, should be considered armed and dangerous.

Police said Williams and 18-year-old Javon Britten of Richton Park were arguing in a food court at Orland Square Mall Monday when Williams allegedly pulled out a handgun and fired several shots. Britten was struck and a bystander's leg was grazed by a bullet.

Police said Britten staggered to a nearby clothing store, where he collapsed. He was pronounced dead at Christ Medical Center in Oak Lawn a short time later.

According to the Illinois Department of Corrections website and Orland Park Police, Williams was convicted of armed robbery in 2017, and that he served a little more than a year in prison before he was released in June last year.

Orland Park is about 20 miles (32 kilometres) southwest of Chicago.