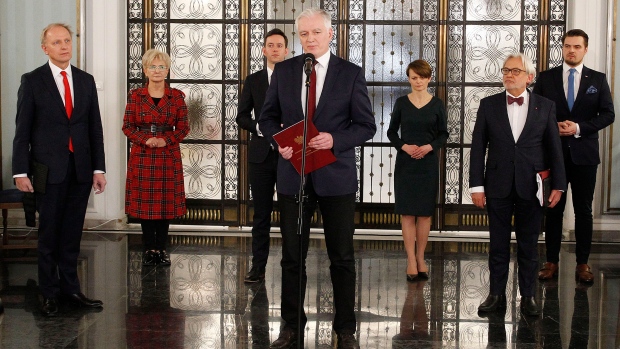 Jaroslaw Gowin, center, the head of a faction within the ruling conservative coalition, speaks to reporters about his proposal to postpone a presidential election in Poland by two years in Warsaw, Poland, Friday April 3, 2020. Uncertainty deepened in Poland on Friday over whether the country will move forward with a presidential election scheduled for May despite the coronavirus pandemic.(AP Photo/Czarek Sokolowski)

WARSAW, Poland -- Poland's government is divided and reportedly struggling for its survival over whether to hold a presidential election in May during the coronavirus pandemic.

The parliament on Monday is expected to vote on a proposal put forward by ruling party leader Jaroslaw Kaczynski to hold the May 10 election by postal vote. But one faction in the governing coalition is opposed and wants the election postponed until after the epidemic.

The parliament had been expected to vote Friday on the postal option but that got delayed by the disagreement. It was not yet clear if the sides would find a compromise on Monday.

"At a time that the state is experiencing its biggest problems in 30 years due to the coronavirus, the power camp is caught up in an internal war," an analysis in the online news portal Onet said.

"Our sources in the governing camp are unanimous in stressing that this crisis could lead to the collapse of the government," the authors, Andrzej Gajcy and Andrzej Stankiewicz, wrote.

Conservative President Andrzej Duda is vying for a second five-year term. The ruling Law and Justice party -- which supports Duda -- has been seeking a way to go ahead with the voting, with polls showing Duda far ahead of his rivals.

Law and Justice leaders want to hold the vote now to consolidate power at a time of crisis. Many feel if Duda were to face a vote in a few months, when the economic pain of the coronavirus lockdown is more painfully felt, he would be less likely to win.

The main opposition party, Civic Platform, has been calling for the government to declare a state of emergency, a legal step that would trigger an automatic postponement of the election.

Opposition lawmakers say holding an election during the pandemic would be undemocratic because opposition candidates cannot travel across the nation of 38 million people to campaign due to a strict government-ordered lockdown as the number of infections rises. Duda, meanwhile, still profits from heavy coverage on state media.

Poland so far has over 4,200 infections and 98 deaths from the coronavirus.

Law and Justice officials insist that the current election timeline -- voting on May 10 with a runoff on May 24 if no candidate wins 50% in the first round -- is dictated by the constitution and should not be changed.

There have also been questions about whether the postal service, which is already struggling, is prepared to handle ballots from 30 million registered voters. One union leader said other authorities, including the army, might have to help.

In preparation for a possible postal vote in May, Kaczynski last week appointed the deputy defence minister to be the new head of Poczta Polska, the postal service.