Pope's diplomacy put to test as leaders flock to Rome 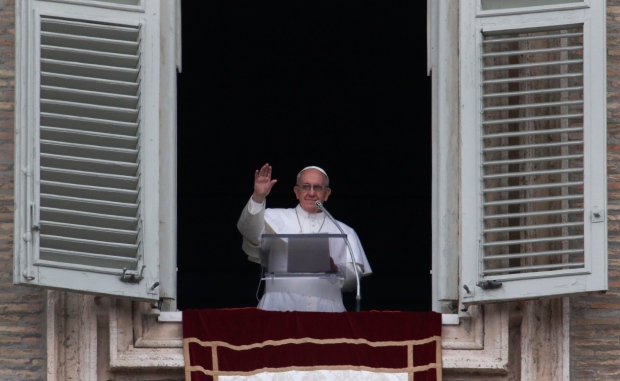 Pope Francis waves during his Angelus prayer from the window of his studio overlooking St. Peter's Square at the Vatican on Sunday, March 17, 2013. (AP Photo/Michael Sohn)

VATICAN CITY -- Pope Francis' diplomatic skills will be put to the test on Tuesday as he hosts political leaders from 130 nations and religious representatives from a variety of faiths who are descending on Rome for his installation Mass, with Latin America strongly represented to celebrate the first pope from the New World.

Among the VIPs expected is the spiritual leader of the world's Orthodox Christians, Bartholomew I, who will become the first patriarch from the Istanbul-based church to attend a papal investiture since the two branches of Christianity split nearly 1,000 years ago. His presence underscores the broad hopes for ecumenical and interfaith dialogue in this new papacy given Francis' namesake, St. Francis of Assisi, and his own history.

Francis' diplomatic mettle was tried on Monday as he held his first audience with a visiting head of state, having lunch with his political nemesis, Argentine President Cristina Fernandez, who asked him to intervene in the dispute with Britain over the Falkland Islands.

It was a baptism by fire, given that the former Archbishop of Buenos Aires has been on record as saying Britain "usurped" the remote islands from Argentina and last year paid homage to the Argentines who were killed trying "to reclaim what is theirs for the fatherland."

Argentina and Britain fought a 1982 war over the islands, which Argentina calls Malvinas. Earlier this month, the islanders voted overwhelmingly to remain a British Overseas Territory.

There was no indication that Francis, now pope, would take up the request from Fernandez, with whom he has clashed for years over her populist policies on gay marriage and other hot-button issues like birth control that will soon confront Francis on a global scale as leader of the world's 1.2-billion Catholics.

Francis may well map out some of his own priorities in his installation Mass on Tuesday, which aside from 132 official delegations is expected to draw scores of Jewish, Orthodox and other Christian representatives. Italian news reports say civil protection officials are gearing up for as many as 1 million people to flock to the event.

Francis will receive each of the government delegations in St. Peter's Basilica after the Mass, and then hold an audience with the ecumenical groups on Wednesday. He has a break from activity on Thursday; a gracious nod perhaps to the fact that the Archbishop of Canterbury, Justin Welby, is being installed that day in London.

As a result, Welby won't be representing the Anglican Communion at Tuesday's installation Mass for Francis, sending instead a lower-level delegation. All told, six sovereign rulers, 31 heads of state, three princes and 11 heads of government will be attending, the Vatican said.

More than a half-dozen Latin American presidents are attending, a sign of the significance of the election for the region. Francis has made clear he wants his pontificate to be focused on the poor, a message that has resonance in a poverty-stricken region that counts 40 per cent of the world's Catholics.

Fernandez scored the only papal audience, meeting Monday with the pope at his makeshift home in the Vatican hotel and staying for lunch afterwards.

There was no immediate comment from the Vatican as to whether Francis would accept Fernandez's Falklands' intervention request. The British Foreign Office, however, made clear it didn't expect any Vatican meddling in the dispute.

"The Holy See is clear that it considers the question of the Falkland Islands as a bilateral one between sovereign nations, and that it does not have a role to play. We do not expect that position to change," it said in a statement.

Francis and Fernandez are longtime rivals: As leader of Argentina's Catholics, he had accused her populist government of demagoguery, while she called his opposition to gay adoptions reminiscent of the Middle Ages and the Inquisition. But where the Falklands are concerned, Francis, like most Argentines, believes the islands rightfully belong to Argentina.

Fernandez told journalists Monday after having lunch with the pope that she had asked for Francis' intercession to "facilitate dialogue" with Britain over the islands.

In asking Francis to intervene, Fernandez said she recalled how Pope John Paul II averted war in 1978 between Argentina and Chile over three tiny islands in the Beagle Channel at the southern tip of South America.

With military governments on both sides poised for battle, he sent his personal envoy to mediate the crisis through shuttle diplomacy between Santiago and Buenos Aires, and eventually brought both governments to the Vatican to consider his compromise.

The conflict wasn't entirely resolved until after democracy returned to Argentina, and both sides signed a "treaty of peace and friendship" at the Vatican in 1984, giving the islands to Chile but maritime rights to Argentina.

On Monday, Fernandez gave Francis a picture of a marble monument honouring the 30th anniversary of John Paul II's negotiations, and then used the opportunity to bring up the issue of sovereignty over the Falklands.

They also seemed to have patched up their relationship.

Fernandez gave the new pope a mate gourd and straw, to hold the traditional Argentine tea that Francis loves, and he gave her a kiss.

"Never in my life has a pope kissed me!" Fernandez said afterward.

As the meeting was under way Monday, the Vatican released details of Francis' installation Mass, saying it would be a simplified version of the 2005 installation Mass that brought Pope Benedict XVI to the papacy, with only a half-dozen cardinals pledging their obedience to him and many gestures to Eastern rite Catholics and Orthodox Christians in a sign of church unity.

Francis is familiar with Orthodox traditions from 14 years of heading the Argentine church's commission on Eastern Rite Christians, who are within the Catholic fold but follow Orthodox religious customs, including some married clergy in lower ranks.

In all, some 33 Christian delegations will be present, as well as representatives of Jewish, Muslim, Buddhist, Sikh and Jain communities.

Those who knew Jorge Mario Bergoglio as leader of Argentina's Catholic Church say promoting interfaith dialogue was at the heart of his view of the what the Catholic faith should be about -- an outward-reaching, bottom-up effort to improve lives, no matter what people's faith.

"He's the one who opened the cathedral of Buenos Aires for interfaith ceremonies, like when we prayed for peace. He's not one of those who waits for you to call them to participate in these events -- he promotes them,"Buenos Aires Rabbi Alejandro Avruj told The Associated Press on Monday.

For Jews, Orthodox and other religious leaders, the new pope's choice of Francis as his name is also important for its reference to the Italian town of Assisi, where Pope John Paul II began conferences encouraging interfaith dialogue and closer bonds among Christians.

The Vatican also released details of Francis' coat of arms and official ring, both of which are in keeping with his style and priorities: The coat of arms is the same Jesuit-inspired one he used as archbishop of Buenos Aires, featuring symbols of Mary, Jesus and Joseph, albeit with the papal trappings of a bishop miter and the crossed keys of the Holy See. The ring was once offered to Pope Paul VI, who presided over the second half of the Second Vatican Council, the church meetings that modernized the church.

Francis will officially receive the ring and the pallium, a wool stole, during Tuesday's installation. 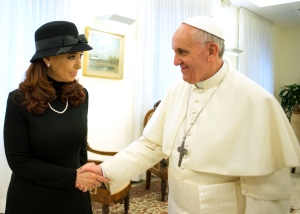