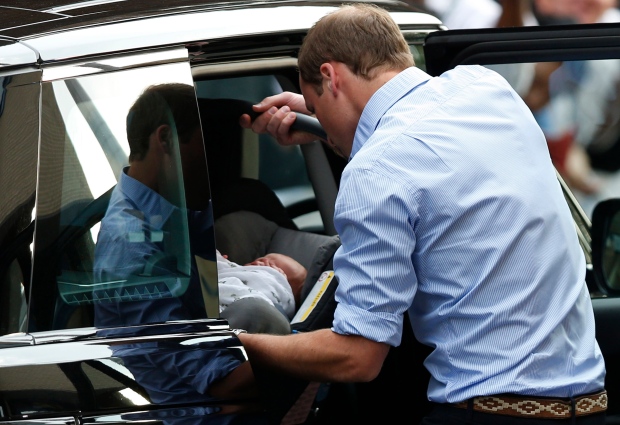 LONDON -- His newborn son is "a little bit of a rascal" and car seats can daunt any dad, Britain's Prince William says.

The second in line to the British throne has described his joy at introducing his son to the world on the steps of a London hospital last month -- and about his nerves over fitting the car seat securely into the Land Rover before driving off.

William told CNN in his first interview since Prince George's birth on July 22 that both he and the Duchess of Cambridge couldn't wait to show off their son when they emerged from St. Mary's Hospital to meet the world's media a day later.

"I'm just glad he wasn't screaming his head off the whole way through," he said in an interview broadcast Monday.

William was quizzed on a range of child-rearing topics -- from baby toys to diapers and sleep deprivation -- and acknowledged that his expert performance sliding his child's car seat into the back of the royal four-wheel drive was a well-drilled exercise.

"Believe me, it wasn't my first time. And I know there's been speculation about that. I had to practice, I really did," he said.

William and his wife's assured, do-it-yourself performance in front of the hospital helped cement the couple's image as the modern face of Britain's monarchy. But William said the decision to take his own baby in hand and drive home in the glare of the international press was a way of establishing his independence.

"I very much feel if I can do it myself, I want to do it myself," he said. "And there are times where you can't do it yourself and the system takes over or it's appropriate to do things differently. But, I think driving your son and your wife away from hospital was really important to me."

As for the nearly 1-month-old baby, William referred to him as "a little bit of a rascal" who he said reminded him of his younger brother, Prince Harry.

Striking a slightly exasperated tone familiar to many new fathers, he said he wished Prince George would settle down a little.

"At the moment, the only legacy I want to pass on to him is to sleep more and maybe not have to change his nappy so many times."

The interview is part of a one-hour CNN documentary, "Prince William's Passion: New Hope, New Father," due to air on Sept. 15.