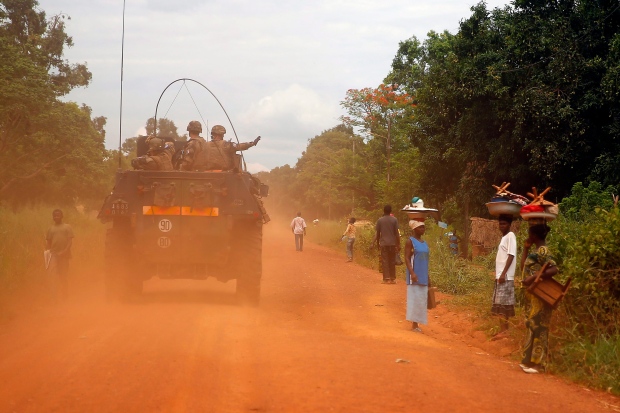 The revelation accompanied word that French authorities had opened a formal judicial inquiry into the case that the Paris prosecutors' office knew about in July, but was made public only last week following a report in a British newspaper, the Guardian.

Independent judges will now take over the case from the prosecutor's office, an acknowledgment of the seriousness and complexity of the accusations that have sparked international dismay and led to the suspension of a U.N. official who leaked the abuse claims.

"The U.N. hierarchy refused this questioning, however, indicating that the functionary benefited from immunity that had to be lifted before any questioning," the prosecutor's office said in a statement. The report's author was not identified.

The statement also cited a total of more than six months of delays in French investigators' efforts to get answers from her, which finally resulted in written responses received on April 29 and in turn led to the probe announced Thursday.

The spokesman for the U.N. secretary-general, Stephane Dujarric, denied that the international body was foot-dragging, telling reporters it has been fully co-operating with the French.

"Quite to the contrary ... we are very much co-operating with French authorities," he said. "We continue to co-operate with them ... They submitted questions in writing, and extensive answers were given."

Earlier Thursday, French Defence Ministry spokesman Pierre Bayle said the ministry was in the process of declassifying a military command report about the case, following a request from the French Justice Ministry.

In December 2013, France deployed troops to the Central African Republic to protect civilians from sectarian violence. The alleged sexual abuses took place over the following five months or so.

French President Francois Hollande has promised tough punishment for any soldier found guilty of sexually assaulting children in the case.

Paula Donovan of activist group AIDS-Free World has said that about 16 French soldiers were accused of abusing 10 boys ages 8 to 15, in some cases in exchange for food.

The U.N. special representative on sexual violence in conflict, Zainab Bangura, told reporters that her office had not been informed of the U.N. report when it was given to French authorities since it has no jurisdiction over soldiers who are not part of U.N. peacekeeping missions.

She said she is happy the French are investigating.

"There has to be accountability," she said.

- Cara Anna at the UN contributed to this report.