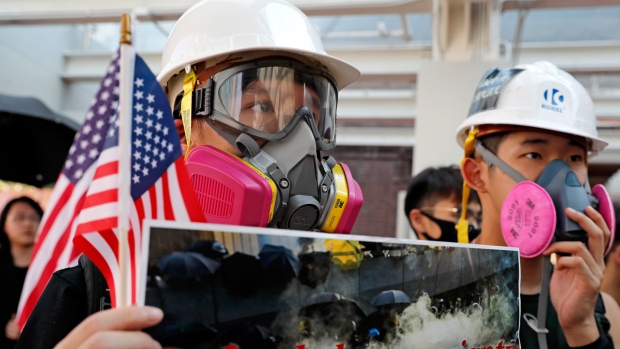 Pro-democracy university students hold U.S. flags and placards at the campus of the University of Hong Kong, Friday, Sept. 20, 2019, as they demand the U.S. Congress to pass the proposed U.S. Act of the Hong Kong Human Rights and Democracy. China's foreign ministry on Thursday accused U.S. congressional leader Nancy Pelosi of making irresponsible remarks about pro-democracy protests in Hong Kong, one day after she welcomed activists from the city to the U.S. Capitol. (AP Photo/Kin Cheung)

Police accused some protesters of throwing gasoline bombs after a march by several thousand people in Tuen Mun, an outlying district in the northwest of the Chinese territory.

The event was relatively small compared with previous demonstrations that have taken place every weekend since June.

The protests started with opposition to a proposed extradition law and have expanded to include demands for greater democracy.

The events are an embarrassment for China's ruling Communist Party ahead of Oct. 1 celebrations of its 70th anniversary in power. Hong Kong's government announced it has cancelled a fireworks display that day, citing concern for public safety.

In Tuen Mun, protesters marched about 2 kilometres (1 1/2 miles) from a playground to a government office building. Many were dressed in black and carried umbrellas, a symbol of their movement.

Protesters chanted, “Reclaim Hong Kong!” and “Revolution of our times!”

Most were peaceful but some took down a Chinese flag from a pole outside a government office and set fire to it. Government broadcaster RTHK said some damaged fire hoses in the Tuen Mun light rail station.

A government statement said some protesters “threw petrol bombs” but gave no details of possible injuries or damage. It told people in the area to stay indoors and keep their windows closed.

The statement said protesters caused unspecified damage to the Tuen Mun light rail station and threw objects onto the tracks.

Organizers announced the event, due to last two hours, was ending after one hour due to the chaotic scene at the station.

That will “only escalate tension between protesters and police,” Mo was quoted as saying.

Elsewhere, scuffles were reported as government supporters heeded a call by a pro-Beijing member of the Hong Kong legislature to tear down protest posters at subway stations.

Hong Kong's leader, Chief Executive Carrie Lam, has agreed to withdraw the extradition bill. But protesters are pressing other demands, including an independent investigation of complaints about police violence during earlier demonstrations.

Protesters complain Beijing and Lam's government are eroding the “high degree of autonomy” and Western-style civil liberties promised to the former British colony when it was returned to China in 1997.

The protests have begun to weigh on Hong Kong's economy, which already was slowing due to cooling global consumer demand. The Hong Kong airport said passenger traffic fell in August, and business is off at hotels and retailers.

Police refused permission for Saturday's march but an appeal tribunal overturned that decision. The panel on Friday gave permission for a two-hour event that it said had to end at 5 p.m.

Protesters in Tuen Mun also complained about a group of women from mainland China who sing in a local park. Residents say they are too loud and accuse some of asking for money or engaging in prostitution.

Those complaints prompted a similar march in July.

Also Saturday, there were brief scuffles as government supporters tore down protest posters at several subway stops, according to RTHK.

The campaign to tear down protest materials was initiated by a pro-Beijing member of Hong Kong's legislature, Junius Ho.

Near the subway station in the Tsuen Wan neighbourhood, a woman who was tearing down posters threw a bag at a reporter and a man shoved a cameraman, RTHK reported. It said there was pushing and shoving between the two sides at stations in Yuen Long and Lok Fu.

Ho made an appearance in the Shau Kei Wan neighbourhood but residents shouted at him and told him to leave, RTHK said.

Ho initially called for protest signs to be torn down in all 18 of Hong Kong's districts but he said Friday that would be reduced to clearing up trash from streets due to “safety concerns.”

On Wednesday, the Hong Kong Jockey Club cancelled a horse race Wednesday after some protesters suggested targeting the club because a horse owned by Ho was due to run.

Later Saturday, some protesters planned to go to another district, Yuen Long, where a group of men with sticks hit protesters and subway passengers in a July 21 incident that caused controversy in Hong Kong.