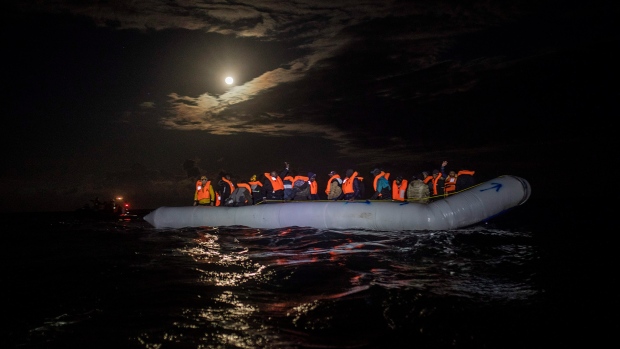 Migrants and refugees from different African nationalities await on an overcrowded rubber boat sailing adrift, to be assisted by aid workers of the Spanish NGO Open Arms in the central Mediterranean Sea, international waters, off the Libyan coast, Friday, Jan. 10, 2020. (AP Photo/Santi Palacios)

ONBOARD THE GEO BARENTS OFF LIBYA (AP) -- Osman Toure was crying from the pain of repeated beatings and torture as he dialed his brother's cellphone number.

Within days, Toure's family transferred the roughly $550 demanded to secure his freedom from a government detention center in Libya. But Toure was not let go - instead, he was sold to a trafficker and kept enslaved for four more years.

Toure is among tens of thousands of migrants who have endured torture, sexual violence and extortion at the hands of guards in detention centers in Libya, a major hub for migrants fleeing poverty and wars in Africa and the Middle East, hoping for a better life in Europe.

The 25-year-old Guinean, along with two dozen other migrants, spoke to The Associated Press aboard the Geo Barents, a rescue vessel operated by the medical aid group Doctors without Borders in the Mediterranean off Libya. Most had been held in trafficking warehouses and government detention centers in western Libya over the past four years.

They were among 60 migrants who fled Libya on Sept. 19 in two unseaworthy boats and were rescued a day later by the Geo Barents. The AP also obtained testimonies from many others collected in recent months by the aid group, known by its French acronym MSF.

The European Union has sent 455 million euros to Libya since 2015, largely channeled through U.N. agencies and aimed at beefing up Libya's coast guard, reinforcing its southern border and improving conditions for migrants.

However, huge sums have been diverted to networks of militiamen and traffickers who exploit migrants, according to a 2019 AP investigation. Coast guard members are also complicit, turning migrants intercepted at sea over to detention centers under deals with militias or demanding payoffs to let others go.

The practice continues unabated and U.N.-commissioned investigators said in a 32-page report last week that “policies meant to push migrants back to Libya to keep them away from European shores ultimately lead to abuses,” including possible crimes against humanity.

Hundreds of thousands of migrants hoping to reach Europe have made their way through Libya, where a lucrative trafficking business has flourished in a country without a functioning government, split for years between rival administrations in the east and west, each backed by armed groups and foreign governments.

The migrants, mostly from sub-Saharan Africa, told the AP that detention center guards beat and tortured them, then extorted money from their relatives, supposedly in exchange for their freedom. Their bodies showed traces of old and recent injuries, and signs of bullet and knife wounds on their backs, legs, arms and faces.

On paper, the detention centers are run by the Directorate for Combating Illegal Migration, which is overseen by the Interior Ministry and Libya's interim authorities, who took power earlier this year under U.N. auspices to carry out national elections by the end of the year. But on the ground, notorious militias remain in control, according to migrants and the U.N. investigators.

“Migrants are detained for indefinite periods without an opportunity to have the legality of their detention reviewed, and the only practical means of escape is by paying large sums of money to the guards or engaging in forced labor or sexual favors inside or outside the detention,” the U.N. report said.

Spokespeople for Libya's government, the Interior Ministry, the directorate and the coast guard did not answer phone calls or respond to messages seeking comment.

Toure, the youngest of seven siblings abandoned by their father, said that as an adolescent he watched others from his small Guinean town of Kindia make it to Europe and help pull their families out of poverty.

He began his own attempt in March 2015, taking odd jobs along the way to finance the trip. Traffickers held him captive for months twice, in Niger and Algeria, before he crossed into Libya in April 2017, he said.

Four months later, Toure embarked from Libya, only to be intercepted by the coast guard and returned to Tripoli. At the port, he and other migrants attempted to flee but were caught by security forces and taken to the al-Nasr Martyrs detention center in Zawiya.

That's when the torture started. He described how guards would hang them upside down and whip their bare feet. At times other migrants were forced or given incentives to take part in the violence.

“A migrant from Ghana refused to beat us, but there was a Cameroonian who was really cruel,” Toure said.

His second week in prison, six guards approached him. One slapped him hard on the right side of his face. The rest kicked and beat him. Then he was handed a cellphone and ordered to call his family.

Ten others in the cell were forced to do the same. Three were taken out by the guards in the next few days. He doesn't know what became of them, he said.

The money sent by captives' relatives was usually transferred via Western Union or an informal system of personal accounts to a trafficker in coordination with the guards. In some cases, like Toure's, families sent money to the detained migrant and guards took them to withdraw it.

Toure was taken from his cell three days after the phone call. He thought he would walk free. Instead, the guards sold him to a trafficker in Zawiya. He spent the next four years enslaved, working in the trafficker's warehouse.

Finally his luck changed in September when the trafficker's wife took pity on him and persuaded her husband to set him free, he said. Within days he was on a small inflatable boat with 55 others attempting the Mediterranean crossing.

Overladen, the boat did not make it far. Those onboard were rescued by the Geo Barents 48 nautical miles off Libya's coast. They were taken to Sicily, where Italian authorities permitted the rescue ship to dock on Sept. 27 and let the migrants apply for asylum. They could still be returned to their home countries if their requests are denied.

Toure and other migrants said that besides plain cruelty, there was racism behind their abuse in Libya. The U.N. report found the same - that Black sub-Saharan Africans were likely to be subjected to harsher treatment than others.

The point of arrival at one of Libya's ports was the first opportunity for Libya's security forces to extract payment from migrants trying to reach Europe.

For some, particularly Arab migrants, the ordeal ended there without detention, as long as they paid. Waleed, a Tunisian, told the AP he bribed guards four times at the Tripoli port and walked free. Three other times he was taken to detention centers, where he found a way to get enough money to the guards and was released.

Mohammed, a Moroccan, also said he was released at port in 2020 by handing over 3,000 dinars ($660). Both men gave only their first names out of fear for the safety of family members still inside Libya.

The Libyan coast guard, which is trained and equipped by the European Union, has intercepted some 87,000 migrants in the Mediterranean Sea since 2016, including about 26,300 so far this year, according to U.N. figures. But only about 10,000 are in detention centers, according to the U.N. migration agency, raising concerns that many are in the hands of criminal groups and traffickers, and others are dead.

Not all have enough money to pay bribes. Mohammed Salah, a 20-year-old migrant from the Ivory Coast, told the AP he was intercepted and returned to Libya in January 2020. He didn't have the 3,000 dinars ($660) demanded for his freedom.

After he argued over the bribe, he was beaten at the police station and suffered a broken leg. Detention center guards then handed him over to a trafficker, who enslaved him for over a year, he said.

Valentin Najang of Cameroon was detained in the Zawiya detention center after being captured early last month. The guards repeatedly beat him and other migrants with sticks and plastic tubing, the 18-year-old told the AP. Once, he watched two guards beat a young migrant from Mauritius unconscious. A week into his detention, his family paid 500,000 Cameroonian francs (over $880) for his freedom.

At the heart of the abuses against migrants remains the question of who can be held accountable. The U.N. report did not name suspects, saying more investigation is needed to determine who was culpable.

But migrants and others inside Libya say the issue is clear cut: It's the militias and warlords who have become powerful government figures in many areas.

The coastal town of Zawiya, where the al-Nasr Martyrs detention center is located, is controlled by the Nasr Martyrs militia, which have “the final word on all the town's security and military matters,” said a former senior official at the Directorate for Combating Illegal Migration, who spoke on condition of anonymity for fear of reprisals.

The militia is led by Mohammed Kachlaf, who was sanctioned in 2018 by the U.N. Security Council, which called his network “one of the most dominant in the field of migrant smuggling and the exploitation of migrants in Libya.”

Zawiya's coast guard unit is commanded by Abdel-Rahman Milad, who was also sanctioned in 2018 by the U.N. Security Council for human trafficking. U.N. experts said Milad and other coast guard members “are directly involved in the sinking of migrant boats using firearms.” Milad has denied any links to human smuggling.

And Tripoli's Abu Salim neighborhood, where a detention center with the same name is located, is controlled by a militia led by Abdel-Ghani al-Kikli. Though Amnesty International has accused him of war crimes and other serious rights violations, he was named this year as the head of the government's so-called Stability Support Authority with even broader arrest powers.

“It is a well-connected mafia with influence in each corner of the government,” the former Directorate for Combating Illegal Migration official said.