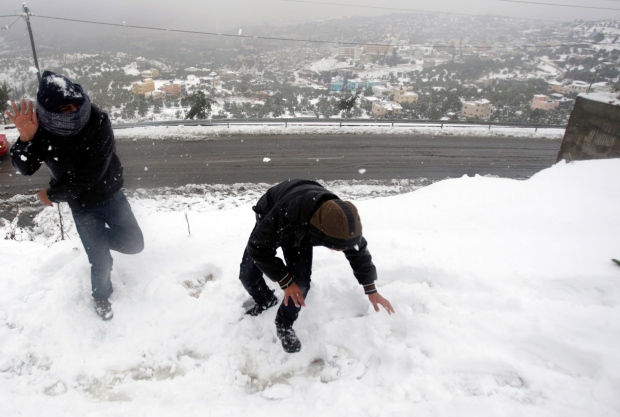 JERUSALEM -- A snowstorm forced a lockdown in Jerusalem on Friday, with police blocking access to and from the ancient city, while Egypt's main ports on the Mediterranean and the Red Sea remained closed for the third straight day due to bad weather.

The cold weather was part of a storm, dubbed Alexa, which has been pounding much of Lebanon and parts of northern Syria since Wednesday, pushing temperatures below zero and dumping snow and heavy rains. The snow has heaped another layer of misery on the already grim existence of many of the more than 2 million Syrians who have fled the civil war raging in their homeland.

Israelis were told over media and public broadcasts on Friday not to enter or leave Jerusalem and some 1,500 people were evacuated from stranded vehicles overnight, said police spokesman Micky Rosenfeld.

The weather even featured in talks between visiting U.S. Secretary of State John Kerry and Prime Minister Benjamin Netanyahu, who said he was briefed on the emergency measures.

Kerry, a former Massachusetts senator, said the snow made him feel "at home."

"I have heard of making guests welcome and feeling at home. This is about as far as I've ever seen anything go ... giving me a New England snowstorm," Kerry said as he viewed a snow-covered Old City of Jerusalem with Netanyahu.

In the West Bank and Gaza, U.N. relief teams offered emergency services to the worst-hit communities.

In Gaza, which was experiencing its first snow in a decade, more than 500 people were evacuated from their homes, according to Hamas spokesman Ihab Ghussein.

Egypt's state MENA news agency said the country's two Mediterranean ports near the city of Alexandria and two ports on the Red Sea remained closed for the third day Friday.

The report quoted the head of the Alexandria port authority, Adel Yassin Hammad, as saying the decision was taken to avoid possible accidents in the ports.