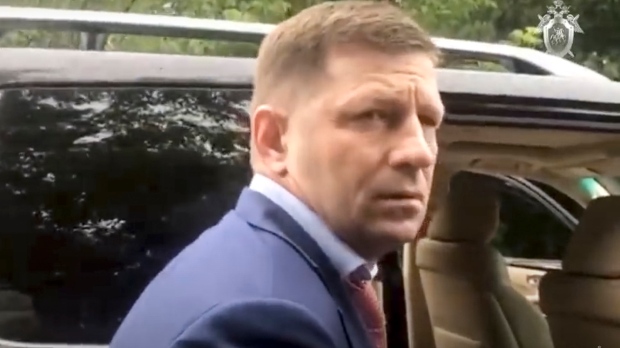 MOSCOW -- A provincial governor in Russia's far east has been arrested on charges of involvement in multiple murders, officials said Thursday.

Sergei Furgal, the governor of the Khabarovsk region along the border with China, was arrested in Khabarovsk and was flown to Moscow.

The Investigative Committee, the nation's top criminal investigation agency, said Furgal is accused of involvement in the murders of several businessmen in the region and nearby territories in 2004-2005.

Russian TV stations showed the video of Furgal's arrest, in which agents get the 50-year-old governor out of his car, search him and drive him away.

The Investigative Committee said that four of Furgal's suspected accomplices were also arrested.

Before becoming the governor of the Khabarovsk region in 2018, Furgal served as a federal lawmaker on the ticket of the Liberal-Democratic Party for several years. In 2015-2016, he headed the public health committee in the lower house of parliament.