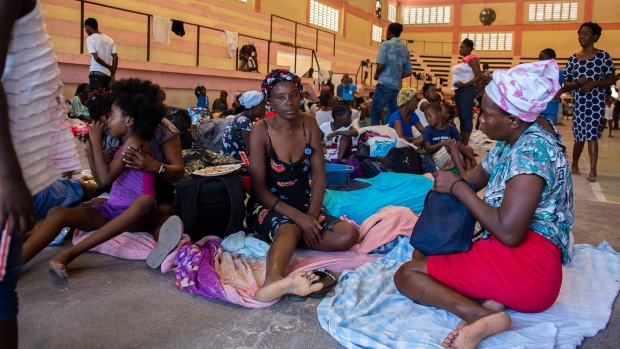 In this handout released Tuesday, June 15, 2021 by UNHaiti, internally displaced people sit inside a shelter at the Center Sportif of Carrefour in Port-au-Prince, Haiti, Tuesday, June 8, 2021. A UNICEF report says that escalating gang violence has displaced thousands of women and children in the capital in the first two weeks of June. (Boulet-Groulx/UNHaiti via AP)

PORT-AU-PRINCE, Haiti (AP) - Escalating gang violence has pushed nearly 8,500 women and children from their homes in Haiti's capital in the past two weeks, according to a UNICEF report.

Officials say the gangs' fight over territory in Port-au-Prince has forced hundreds of families to abandon burned or ransacked homes in impoverished communities, with many of them staying in gymnasiums and other temporary shelters that are running out of water, food and items like blankets and clothes.

Bruno Maes, Haiti's representative for the U.N.'s children agency that issued the report late Monday, compared the effect to guerrilla warfare, “with thousands of children and women caught in the crossfire.”

Nearly 14,000 people in Port-au-Prince have been displaced by violence in the past nine months, according to the U.N. office overseeing humanitarian coordination. Families with young children have been sleeping on concrete floors of a gymnasium in the Carrefour neighborhood, with only a sheet serving as a bed and their scant belongings stuffed into bags nearby.

Many expect the violence to increase as Haiti prepares for general elections scheduled for September and November: They accuse gangs of trying to boost support for certain candidates and of targeting neighborhoods that organize protests against President Jovenel Moise.

Pierre Esperance, executive director of the Haitian National Human Rights Defense Network, said gangs control about 60% of the country's territory and that 12 massacres have been reported since 2018 in disadvantaged communities. However, he said he is especially worried about the most recent upswing in violence.

“It's the worst we've seen,” he said. “Gangs have so much power, and they are tolerated. ... Each day that passes with Jovenel in power, the situation is going to deteriorate.”

A spokesman for Moise could not be immediately reached for comment.

Last week, Leon Charles, general director of Haiti's National Police, said gangs are fighting over territory and called on people to rise up against them: “The moment has arrived for the collaboration of all sectors.”

In addition to infiltrating rival shantytowns, gangs have targeted police stations in recent weeks, killing several officers. They also have raided businesses and fired on a car dealership on Monday as customers and employees fled. Hours later, Haiti's National Police said they had the situation under control and were collaborating with citizens “to thwart the attempts of these armed gangs wanting at all costs to create a climate of terror in the country.”

The United Nations Integrated Office in Haiti said it was deeply concerned about the upsurge in gang violence and called for it to end so humanitarian aid could reach those in need.

Businesses and schools have closed and public transportation ceased in communities most affected by the violence, including Martissant and parts of Delmas, with few entering or crossing the area for fear of being killed.

Doctors Without Borders said its emergency center in Martissant received more than 40 patients with gunshot wounds from June 2-4 alone, and that its employees have had to take cover from stray bullets.

“We are witnessing an extremely worrying deterioration in the security situation,” the mission said. “At a time when we should be scaling up because of COVID-19 and other needs, we are struggling to keep our existing facilities open due to insecurity.”

The mission and other health experts say they worry people aren't seeking medical help for fear of being injured or killed if they leave their homes as Haiti struggles with a spike in COVID-19 cases while still awaiting its first shipment of vaccines.

Meanwhile, Esperance, the human rights activist, said he doesn't foresee a quick solution: “It will be absolutely impossible to hold elections in Haiti in 2021.”