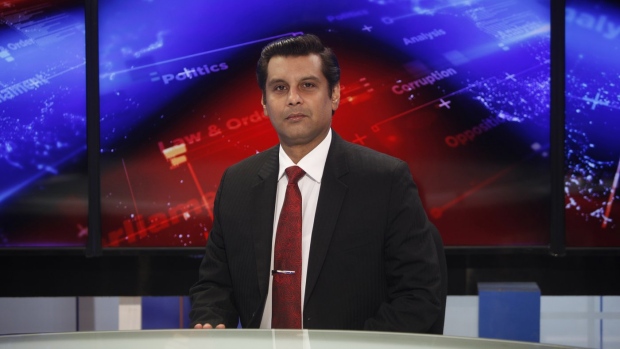 Senior Pakistani journalist Arshad Sharif poses for photograph prior to recoding an episode of his talk show at a studio, in Islamabad, Pakistan, on Dec. 15, 2016. Pakistani investigators claim that the killing in Kenya of one of Pakistan’s most prominent journalists was a “planned assassination", according to a report released Wednesday, Dec. 7, 2022. Islamabad police meanwhile filed charges against two hosts of the journalist in the African country and who were with him at the time of the shooting. (AP Photo)

ISLAMABAD (AP) — The killing in Kenya of an outspoken Pakistani journalist was a “planned assassination," a team of Pakistani investigators said in a report released Wednesday, weeks after the mysterious slaying triggered condemnations and calls for an independent probe.

Meanwhile, Islamabad police charged two Pakistani businessmen living in Kenya who had hosted Arshad Sharif in the African country with involvement in his killing. The report offered no evidence for its claims and there was no immediate comment from Kenya.

The 50-year-old Sharif was hiding in Kenya to avoid arrest at home on charges of maligning Pakistan's national institutions — a phrase used for critics of the powerful military, which has ruled Pakistan for half of its 75-year history.

He was killed on Oct. 23, when the car he was in sped up and drove through a checkpoint outside the Kenyan capital and police opened fire. Nairobi police later expressed regret over the incident, saying it was a case of “mistaken identity” during a search for a similar car involved in a child abduction case.

News of the killing shook Pakistan and days later, thousands came out for Sharif's funeral as the nation mourned.

The international media watchdog Reporters Without Borders demanded an independent probe. Pakistan’s prime minister announced an investigation and promised the government's findings would be shared with the public. The military and Pakistani journalists also demanded a probe, as did Sharif's widow, Javeria Siddique, his mother Riffat Ara Alvi and other family members.

The investigators' 592-page report, seen by The Associated Press, said the Kenyan police issued contradictory statements following the killing. As part of the probe, two Pakistani officials had traveled to Kenya where they met with police and Sharif's hosts, brothers Kuram and Waqar Ahmed.

According to the report, Kuram told the investigators that he was in the car with Sharif at the time of the shooting, traveling home after dinner out. They saw the roadblock, which Kuram believed to have been set up by robbers. As they sped through without stopping, he heard the fatal gunshots, he said.

Kuram said he then called his brother who advised that he keep driving until they reached the family's farmhouse, several kilometers (miles) away. Once at the house, the brothers found Sharif was already dead, Kuram was quoted as saying.

The report shed no light as to whether it found Kuram's account suspicious. It only said the Kenyan police were apparently “used as instruments" in the killing, possibly with financial or other compensation — again, without elaborating or offering evidence to support the accusation.

“This was a planned, targeted assassination ... rather than a case of mistaken identity" as the Kenyan police claimed, the report said. It refrained from blaming anyone specifically, saying only that individuals in Kenya, Dubai or Pakistan may have had a role in the slaying.

Sharif had stayed in the United Arab Emirates after leaving Pakistan in August and before traveling on to Kenya.

The report further suggested that the bullet that fatally wounded Sharif was fired from either inside the car or from close range. It again did not elaborate.