Richard Serra's art installation hard to miss in Qatar desert, once you get there 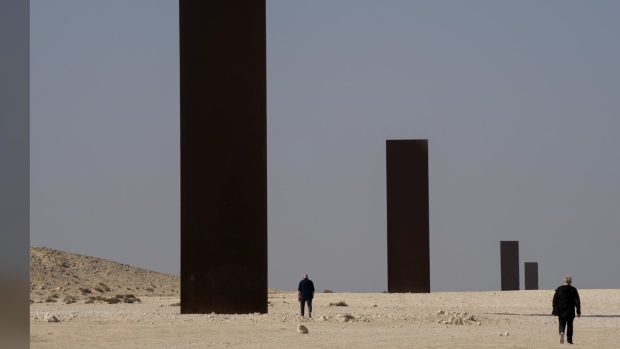 People overlook famous American artist Richard Serra's 'East-West/West-East' art as it stands in a desolate section of the Brouq nature reserve in the northwestern part of the country's desert close to Zekreet, Qatar on Saturday, December 3, 2022. Four steel plates, each 14 metres high, span a one-kilometer stretch of the desert. THE CANADIAN PRESS/Nathan Denette

Art stands tall in the desert some 75 kilometres northwest of Doha.

You need a rugged vehicle and no small resolve to find it, given signage is almost non-existent. The last few kilometres take time as you cross the desert on a slightly flattened but irregular path well away from the closest blacktop. Proceed with caution.

But "East-West/West-East" by American sculptor Richard Serra is worth the effort.

Completed in 2014, the installation comprises four giant steel plates — the outer two stand 16.7 metres high and the inner two 14.7 metres — and span more than a kilometre. Slightly different in height, to compensate for the difference in ground level, they line up like enormous fence posts in the barren desert flanked by gypsum plateaus at some points.

If not the middle of nowhere, it's well on the way.

Possibly the last place on earth you'd expect to see "one of the most significant artists of his generation," as Serra is dubbed by the Gagosian Gallery which has showcased his work in both New York and France.

"Taking art to the people," is how Qatar Museums, the country's arts and culture arm, explains it..

Depending on the direction you approach, you see only part of the art. As you get closer, the dark plates get bigger and bigger and you get to see all four.

"After the perceptual bombardment of Doha, with its architecture dominated by idiosyncratic shapes and kitschy facades, the sensuous experience prompted by the rigorous abstraction of the (desert) sculpture is at once bracing and sensitizing," wrote Artforum magazine.

"Serra reminds the viewer, like 19th-century German Romantic artists such as Caspar David Friedrich, of man’s frailty in the face of nature’s omnipotence," added Numero magazine.

For non art-critics, imagine the monolith in "2001: A Space Odyssey" on steroids and times four in the desert. Stand next to one and you feel like an ant — a very hot ant under the blazing Qatari sun.

You'll also likely be alone, albeit under review from what seemed like security in a nearby pickup truck.

The 84-year-old Serra, who worked in steel mills during college, is known for his large-scale abstract steel sculptures.

There is another in Doha itself. A sculpture called "7" — the number seven has spiritual significance in Islamic culture — was commissioned by Qatar Museums.

Built out of seven steel plates, it faces the sea at MIA Park, adjacent to the Museum of Islamic Art.

Like a billionaire stocking his mansion with objets d'art, the government of Qatar has dug deep into its oil-filled coffers to decorate the country with world-class art.

There are big-ticket art works all over.

In 2013, Qatar Museums Authority head Sheikha al-Mayassa al-Thani, the daughter of the emir of Qatar, was listed atop ArtReview magazine's annual Power 100 list "on account of her organization’s vast purchasing power and willingness to spend at a rate estimated to be (US)$1 billion a year — in order to get top works of art for its Doha museums," ArtReview said.

"The Miraculous Journey" by English artist Damien Hirst is hard to miss outside Sidra Medicine centre just down the street from the QNCC. The 14 monumental bronze sculptures chronicle the gestation of a fetus inside a uterus, from conception to birth — ending with a statue of a 14-metre-tall anatomically correct baby boy.