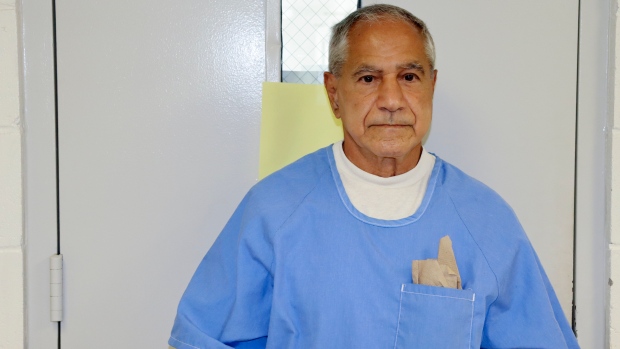 In this image provided by the California Department of Corrections and Rehabilitation, Sirhan Sirhan arrives for a parole hearing Friday, Aug. 27, 2021, in San Diego. Sirhan faces his 16th parole hearing Friday for fatally shooting U.S. Sen. Robert F. Kennedy in 1968. (California Department of Corrections and Rehabilitation via AP)

SAN DIEGO (AP) - California's parole board voted Friday to free Robert F. Kennedy's assassin after two of RFK's sons said they supported releasing him and prosecutors declined to argue he should be kept behind bars. But the governor ultimately will decide if Sirhan Sirhan leaves prison.

Douglas Kennedy was a toddler when his father was gunned down in 1968. He told a two-person board panel that he was moved to tears by Sirhan's remorse and that the 77-year-old should be released if he's not a threat to others.

“I'm overwhelmed just by being able to view Mr. Sirhan face to face,” he said. “I've lived my life both in fear of him and his name in one way or another. And I am grateful today to see him as a human being worthy of compassion and love.”

Robert F. Kennedy Jr., who has spoken in favor of Sirhan's release in the past wrote in favor of paroling Sirhan. He said in the letter that he met him in prison and was moved by Sirhan “who wept, clinching my hands and asked for forgiveness.”

“While nobody can speak definitively on behalf of my father, I firmly believe that based on his own consuming commitment to fairness and justice, that he would strongly encourage this board to release Mr. Sirhan because of Sirhan's impressive record of rehabilitation,” he said in a letter submitted during the hearing to the board.

Sirhan, whose hair is now white, smiled, thanked the board and gave a thumbs-up after the decision to grant parole was announced. It was a major victory in his 16th attempt at parole. But it does not assure his release.

The ruling will be reviewed over the next 120 days by the board's staff. Then it will be sent to the governor, who will have 30 days to decide whether to grant it, reverse it or modify it. If Sirhan is freed, he must live in a transitional home for six months, enroll in an alcohol abuse program and get therapy.

Robert F. Kennedy was a a U.S. senator from New York and the brother of President John F. Kennedy, who was assassinated in 1963. RFK was seeking the Democratic presidential nomination when he was gunned down at the Ambassador Hotel in Los Angeles moments after delivering a victory speech in the pivotal California primary. Five others were wounded.

Sirhan, who insists he doesn't remember the shooting and had been drinking alcohol just beforehand, was convicted of first-degree murder. He was sentenced to death after his conviction, but that sentence was commuted to life when the California Supreme Court briefly outlawed capital punishment in 1972.

At his last parole hearing in 2016, commissioners concluded after more than three hours of intense testimony that Sirhan did not show adequate remorse or understand the enormity of his crime.

On Friday, Sirhan again said he didn't recall the killing, but he made multiple attempts to show nonetheless he takes responsibility for the harm he caused.

“Sen. Kennedy was the hope of the world ... and I harmed all of them and it pains me to experience that, the knowledge for such a horrible deed, if I did in fact do that,” said Sirhan, appearing on camera from a San Diego County prison at the virtual proceeding, wearing his blue prison uniform, a paper towel folded as a handkerchief peeking from his shirt pocket.

Parole Board Commissioner Robert Barton said Sirhan showed he was a different man from not only 1968 but 2016.

“We saw the improvement that you've made, and all of the other mitigating factors, and we did not find that your lack of taking complete responsibility” for the crime as proof of currently being dangerous to society.

Barton said Sirhan had made a concerted effort to follow the board's suggestions from 2016. That included enrolling in more than 20 programs focused on self-help, controlling his anger and other emotions, Barton said, noting that Sirhan did so even during the coronavirus pandemic.

Because of laws passed in 2018, the board was required to take into account this time the fact that he had suffered childhood trauma from the bombings in the Middle East, committed the offense at a young age and is now an elderly prisoner.

The board found that despite the magnitude of the crime, he wasn't likely to reoffend and didn't pose an unreasonable threat to public safety.

“Not withstanding its atrocity, its impact, not just on the families and the victims and the nation as a whole and perhaps the world as a whole - if you were sentenced to life without parole that would be a different matter, but you were sent to life with parole,” Barton said.

Barton said the board's decision was not influenced by the fact that prosecutors did not participate or oppose Sirhan's release under a policy by Los Angeles County District Attorney George Gascon, a former police officer who took office last year after running on a reform platform. Gascon, who said he idolized the Kennedys and mourned RFK's assassination, believes the prosecutors' role ends at sentencing and they should not influence decisions to release prisoners.

“Obviously they opposed in the past and even if they had opposed it today, our decision would be the same,” Barton said.

The Los Angeles Police Department, relatives of some of the victims and members of the public submitted letters opposing Sirhan's release.

“This is one of the most notorious political assassinations in American history and the killer is being considered for release without benefit of a representative on behalf of the people of California. That is disgraceful,” El Dorado County District Attorney Vern Pierson, the association's president said.

Sirhan's lawyer, Angela Berry, had urged the board to base its decision on who Sirhan is today and not what he did more than 50 years ago.

Sirhan said he had learned to control his anger and was committed to living peacefully.

“You have my pledge. I will always look to safety and peace and non-violence,” he told the panel.

Sirhan, a Christian Palestinian from Jordan, has acknowledged he was angry at Kennedy for his support of Israel. When asked about how he feels about the Middle East conflict today, Sirhan broke down crying and temporarily couldn't speak.

“Take a few deep breaths,” said Barton, who noted the conflict had not gone away and still touched a nerve.

Sirhan said he doesn't follow what's going on in the region but thinks about the suffering of refugees.

“The misery that those people are experiencing. It's painful,” Sirhan said.

If released, Sirhan could be deported to Jordan, and Barton said he was concerned he might become a “symbol or lightning rod to foment more violence.”

Sirhan said he was too old to be involved in the Middle East conflict and would detach himself from it.

“The same argument can be said or made that I can be a peacemaker and a contributor to a friendly nonviolent way of resolving the issue,” said Sirhan, who told the panel the hoped to live with his blind brother in Pasadena, California.

Paul Schrade, a union leader and aide to RFK who was among five people wounded in the 1968 shooting, also spoke in favor of Sirhan's release.

FILE - In this May 9, 1968 file photo, Sen. Robert F. Kennedy speaks to the delegates of the United Auto Workers at a convention hall in Atlantic City, N.J. Prosecutors for the first time are not opposing the release of Sirhan Sirhan. The 77-year-old prisoner on Friday, Aug. 27, 2021, faces his 16th parole hearing for fatally shooting Robert F. Kennedy in 1968. (AP Photo, File)