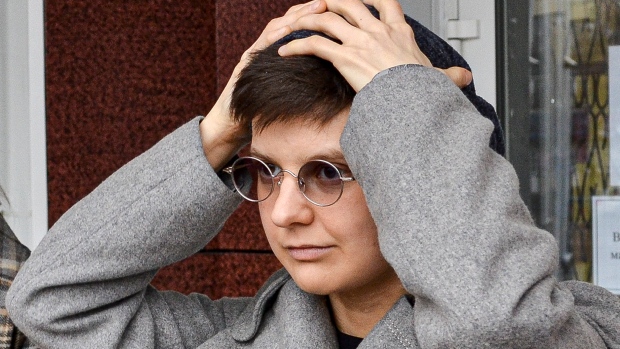 The charges against activist Yulia Tsvetkova, 27, in the far eastern city of Komsomolsk-on-Amur have brought international outrage. She faces up to six years in prison on charges reportedly related to her group on the popular Russian social media network VKontakte, where stylized drawings of vaginas were posted. Tsvetkova is not allowed to disclose details of the criminal case against her.

The hearing comes a year and a half after she was first detained and eight months after Russian President Vladimir Putin signed constitutional amendments that outlawed same-sex marriage and tasked the government with “preserving traditional family values.”

Tsvetkova's lawyer, Irina Ruchko, told reporters after the hearing that she maintains her innocence and the defence intends to prove it in court.

Tsvetkova ran a children's theatre and was a vocal advocate of feminism and LGBT rights. She founded an online group called Vagina Monologues that encouraged followers to fight the stigma and taboos surrounding the female body, and posted other people's art in it.

Amnesty International last week called the case, which is being heard behind closed doors, “Kafkaesque absurdity” and urged Russian authorities to drop all charges. It said Tsvetkova was merely “expressing her views through art.”

Tsvetkova's mother, Anna Khodyreva, echoed this sentiment in an interview with The Associated Press.

Tsvetkova was detained in November 2019 and spent the next four months under house arrest. Her home was raided, along with her mother's education studio for children.

The activist was fined twice for violating Russia's law against disseminating gay “propaganda” to minors. The court ordered Tsvetkova to pay a fine of 50,000 rubles ($780) in December 2019 for running an LGBT-themed online group, and 75,000 rubles ($1,060) in July 2020 for a drawing in support of LGBT families. The second fine was later decreased to 50,000 rubles.

Many public figures have spoken out in her support, including Russian state TV veteran Vladimir Pozner. Activists across Russia have protested her prosecution, artists dedicated performances to her and an online petition demanding that the charges be dropped gathered over 250,000 signatures.

On Saturday, an exhibition of Tsvetkova's paintings opened in St. Petersburg.

“The snowball of censorship has started to bother the artistic community very much, and we understood that if we don't stand up for Yulia, don't support her, any other person can be next,” artist Alexei Gorbushin, who organized and took part in performances in Tsvetkova's support, said at the exhibition.

The European Union's delegation to Russia tweeted the bloc “is closely following” the case against Tsvetkova and that “apparently, her persecution is related to her public position as an LGBT activist.” The delegation called on Russian authorities to stop the prosecution.

In addition to pressure from authorities for the past two years, Khodyreva says she and her daughter have received death threats and were repeatedly harassed by strangers. Khodyreva's education studio for children has lost many clients. Tsvetkova's children's theatre, Merak, no longer exists - frequent visits from law enforcement were too distressing for the children so it shut down, Khodyreva said.

“It is terrifying. I'm still looking back at the door even now,” Khodyreva told the AP. “The police have barged in so many times that â€¦ I'm not ready to have the children involved in this mayhem.”

Tsvetkova's troubles started when the children's theatre was preparing to show a play about gender stereotypes, titled “The Blues and the Pinks,” in March 2019 at a theatre festival she organized.

The festival lost two venues it found, Khodyreva said, and police questioned children involved in the play about whether Tsvetkova, who directed it, talked to them about LGBT issues. The play had nothing to do with LGBT issues - the name referred to colours traditionally associated with boys and girls - but in the 1990s, “blue” and “pink” in Russian were popular colloquialisms for gay men and women.

According to Khodyreva, police didn't talk to the children's parents, many of whom supported her and her daughter, and the contacts with police were traumatic for the theatre's young students.

“We saw how bad the children felt. We saw how the boy who came up with the name for the play cried, thinking it was his fault,” Khodyreva said, adding that another boy who worried that he'd told police something about her daughter cried.

Tsvetkova was repeatedly summoned for interrogations. In March 2019, the activist said she was questioned about a series of her drawings called “A Woman is Not a Doll.” The cartoonish depictions of naked or semi-clad women bore captions such as “Real women have hair on their bodies - and that's normal,” “Real women have body fat - and that's normal.” Police alleged the images were pornographic, Tsvetkova said in a VKontakte post.

Months later, she was detained and charged with disseminating pornography.

Russia's prominent human rights group Memorial has declared Tsvetkova a political prisoner. The group said her persecution was related to “her civic engagement and feminist views she didn't conceal and promoted through absolutely legal means as an activist and a contemporary artist” and the narrative of defending “traditional values” the Kremlin has embraced in a bid to tighten its grip on power.

Alexander Permyakov in Komsomolsk-on-Amur and Yekaterina Krylova in St. Petersburg contributed to this report.